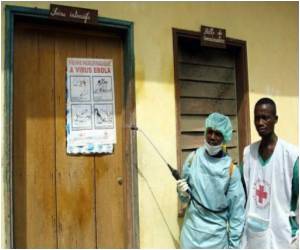 US scientists said on Sunday they had cleared a key hurdle in the quest for a drug to treat Ebola, a notorious African virus and feared future weapon of bioterrorism.

A treatment administered to rhesus monkeys within an hour of being infected by the deadliest strain of Ebola was 60 percent effective, and a companion drug was 100-percent effective in shielding cynomolgus monkeys against Ebola's cousin, the Marburg virus.

After studing the findings, the US Food and Drug Administration (FDA) has given the green light for trials on a small group of human volunteers, they said.


Ebola and Marburg are part of a family of so-called filoviruses, which cause haemorrhagic fever -- a disease with mortality rates of up to 90 percent where, in some cases, the patient bleeds to death.

According to a study a minor reduction in levels of a gene called CD45 may provide protection against the virus that causes Ebola hemorrhagic fever and the bacterium that causes anthrax.
Advertisement
The drugs are in a class of compound called PMO, for phosphorodiamidate morpholino oligomers. They are designed to hamper the virus' replication in cells, thus buying time for the immune system to mount a response and crush the invader.

The research, appearing online in the journal Nature Medicine, was conducted by the US Army Medical Research Institute of Infectious Diseases in collaboration with a Washington-based biotech firm, AVI BioPharma.

The Pentagon pumped funding into research for a vaccine and treatment for Ebola-type viruses in the wake of the September 9 2001 terror attacks on the United States.

Filoviruses are on the list of pathogens such as anthrax that are considered tempting sources for biological warfare or terrorism.

An important step in combatting Ebola was announced in May this year, again using tests on lab monkeys but involving a somewhat different technique to disrupt viral replication.

Despite this progress, a long road lies ahead before any treatment is licensed for humans, experts say.

Testing a prototype drug is a three-phase process that starts with a tiny group of volunteers, where it is initially assessed for safety, and then broadens out to successively bigger groups, where effectiveness becomes a parallel question.

The virus has a natural reservoir in several species of African fruit bat. Gorillas and other non-human primates are also susceptible to the disease.