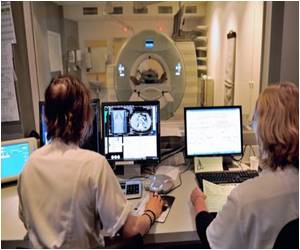 Researchers have used advanced electron microscopy techniques to determine the first accurate structural map of Mediator, one of the largest and most complex "molecular machines" in cells.

The team was led by researchers at The Scripps Research Institute (TSRI). Mediator is crucial for the regulation of most genes' activity and works in the cells of all plants and animals. The mapping of its structure-which includes more than two dozen unique protein subunits-represents a significant advance in basic cell biology and should shed light on medical conditions involving Mediator's dysfunction, from cancer to inherited developmental disorders.

The finding demonstrates how recently developed molecular imaging methods can be applied to characterize large and important protein complexes.


"Being able to determine how these large molecular machines look, how they're organized and how they move, will be critical for a better understanding of many key processes in cells," said TSRI Associate Professor Francisco J. Asturias, the senior author of the study, which was published on June 5, 2014 by the journal Cell.

Macrophage-Derived Mediators may Have Potential as Biomarkers for Kidney Stone Risk: Study

The detailed map of Mediator comes nearly 20 years after the complex was first described by Stanford University biologist Roger Kornberg and colleagues. Kornberg, whose lab members at the time included Asturias, later won a Nobel Prize for his work on the gene transcription machinery of cells.

This gene transcription machinery evolved to perform one of the most basic and routine functions in biology, namely the copying of the information encoded in the DNA of genes into portable RNA "transcripts"-some of which stay and work in the cell nucleus, while others exit the nucleus and are translated into proteins.

Each cell has its own pattern of gene transcription activity, determined by a regulatory system in which Mediator plays an indispensable role. The huge Mediator complex enables transcription factors and other regulatory proteins to influence the RNA polymerase II that actually performs the transcription.

To understand precisely how Mediator does its job, scientists have needed an accurate 3-D model of its architecture, including the locations of all its subunit proteins and a description of the different conformations Mediator can adopt to influence interactions between other components of the transcription machinery.

However, Mediator is enormous by biological standards: the version found in yeast has 25 distinct protein subunits and the human version has 30. It is also highly flexible. That combination of large size, high complexity and high flexibility makes it a poor candidate for high resolution imaging methods such as X-ray crystallography or nuclear magnetic resonance spectroscopy.

As a postdoctoral researcher in the Kornberg laboratory in the 1990s, Asturias helped pioneer the use of "single particle" electron microscopy (EM) for the imaging of large transcription complexes such as Mediator. Single-particle EM requires the taking of thousands of separate EM images of a particle of interest-typically very "noisy" images, which depict a particle in different orientations and perhaps also in a number of different conformations. All these data must be filtered and averaged to reduce the noise and yield useful 3-D pictures. In a 1999 study in Science, Asturias and colleagues used an early form of single-particle EM to determine the first rough structure of the full Mediator complex.

In the decade and a half since then, Asturias''s group has continued to use EM techniques to study Mediator. Others have used high-resolution techniques to study individual Mediator subunits or portions of the complex. However, a clear and accurate picture of how the whole structure fits together has been elusive until now.

Turning a Model on its Head

To determine the full structure clearly, Asturias and his colleagues began by producing highly pure quantities of a standard yeast version of Mediator-the purification process itself being a major challenge. They then used this collection of Mediator particles to record roughly 85,000 EM images, which they categorized according to conformation. Averaging these yielded the clearest 3D model yet of the Mediator structure, to a resolution of about 18 Angstroms (1.8 billionths of a meter).

Using various other biochemical analyses, including the subtraction of different protein subunits to see how the EM images changed, the scientists were able to identify the precise locations of yeast Mediator's 25 protein subunits.

This mapping resulted in a comprehensive revision of the old rough model of Mediator's head-middle-tail structure. "After we located all the protein subunits, we realized that the head module is at the top of Mediator, not the bottom as had been thought," said Kuang-Lei Tsai, a postdoctoral fellow in the Asturias Laboratory, who was first author of the study. "These new data have helped us make sense of many previous biochemical observations."

Asturias and Tsai next collaborated with the laboratory of Joan and Ron Conaway-Joan is another Kornberg alumnus-at the Stowers Institute for Medical Research in Kansas City. The Conaway team had been working on human Mediator and now provided pure samples for EM imaging, as well as biochemical analyses of the subunit locations.

This work revealed that human Mediator shares the same broad architecture, implying that this structure has been, for the most part, conserved throughout the billion years of evolution that separate yeast and humans. "Basically the two Mediators have similar overall structure," said Tsai.

In the last part of the study, Asturias and Tsai used the new structural data to show how Mediator likely changes its conformation as it interacts with RNA polymerase on the one hand, and various transcription regulators on the other.

"This study has given us a fairly definitive picture of the Mediator architecture and how the different subunits are organized, so we can start to work towards an atomic resolution model," Asturias said. "We also want to understand better how Mediator interacts with all those other proteins to actually carry out transcription in a regulated manner."

In addition to Asturias, Tsai and Joan and Ron Conaway, the co-authors of the study, "Subunit Architecture and Functional Modular Rearrangements of the Transcriptional Mediator Complex," were Chieri Tomomori-Sato and Shigeo Sato, also of the Stowers Institute for Medical Research.

The research was funded in part by the National Institutes of Health (grants R01 GM67167, R01 GM41628) and the Helen Nelson Medical Research Fund at the Greater Kansas City Community Foundation.

About The Scripps Research Institute

The Scripps Research Institute (TSRI) is one of the world's largest independent, not-for-profit organizations focusing on research in the biomedical sciences. TSRI is internationally recognized for its contributions to science and health, including its role in laying the foundation for new treatments for cancer, rheumatoid arthritis, hemophilia, and other diseases. An institution that evolved from the Scripps Metabolic Clinic founded by philanthropist Ellen Browning Scripps in 1924, the institute now employs about 3,000 people on its campuses in La Jolla, CA, and Jupiter, FL, where its renowned scientists-including three Nobel laureates-work toward their next discoveries. The institute''s graduate program, which awards PhD degrees in biology and chemistry, ranks among the top ten of its kind in the nation.

Vent Forte (Theophylline) Sanatogen The Essence of Yoga Blood Pressure Calculator Blood - Sugar Chart Loram (2 mg) (Lorazepam) Selfie Addiction Calculator Hearing Loss Calculator Find a Hospital Nutam (400mg) (Piracetam)
This site uses cookies to deliver our services. By using our site, you acknowledge that you have read and understand our Cookie Policy, Privacy Policy, and our Terms of Use