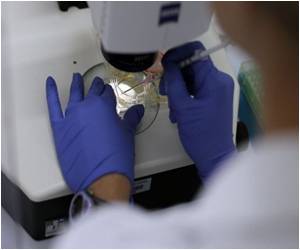 Scientists found out that the conformational defect in a specific protein causes Autosomal Dominant Lateral Temporal Lobe Epilepsy (ADLTE) which is a form of familial epilepsy.

They showed that treatment with chemical corrector called "chemical chaperone" ameliorates increased seizure susceptibility in a mouse model of human epilepsy by correcting the conformational defect. This was published in Nature Medicine (December 8, 2014 electronic edition).

Researchers Identify Genetic Link for a Progressive Form of Epilepsy

A new gene for a progressive form of epilepsy has been identified in a study led by researchers at University of Helsinki.
Advertisement

Mutations in the gene LGI1, encoding a secreted protein, cause familial temporal lobe epilepsy. The research group of Professor Masaki Fukata, Associate Professor Yuko Fukata, and Assistant Professor Norihiko Yokoi of the National Institute for Physiological Sciences (NIPS), National Institutes of Natural Sciences (NINS), in collaboration with the group of Professor Masahiko Watanabe of the Hokkaido University Graduate School of Medicine, Professor Dies Meijer of the Erasmus University Medical Center in the Netherlands, and Professor Takao Hamakubo of the Research Center for Advanced Science and Technology, The University of Tokyo, investigated 22 mutations in the LGI1 gene found in patients with human epilepsy.


In 19 mutations, LGI1 mutant protein was secretion-defective. One of these mutations was introduced to mice which produced symptoms of epilepsy. In LGI1 mutant mice, there was a decrease in the amount of LGI1 functioning normally outside the cell (i.e., synapse) due to the degradation by an intrinsic quality control system that rapidly degrades and eliminates mutant proteins.

Have You Heard of Sudden Unexpected Death in Epilepsy?

Sudden unexpected death in epilepsy (SUDEP) is concerning and many - even those with seizure disorders - may not be aware of this condition.
Advertisement
A small molecule called chemical chaperone (4-phenylbutyrate) was administrated to LGI1 mutant mice with a view to correct the misfolding of the LGI1 mutant protein and to cause normal secretion to the synapse. It was found that the mice had decreased seizure susceptibility.

Epilepsy is a common brain disorder that affects 1% of the population. In some cases, current antiepileptic drugs have a limited role in the treatment. According to Professor Masaki Fukata, "Chemical chaperone treatment focused on correcting the misfolding in proteins has been tried in inherited diseases including cystic fibrosis and lysosome disease. This is the first for chemical chaperones to be applied as a therapeutic option for epilepsy. The same therapeutic strategy may also be of benefit to epilepsy caused by genetic mutations other than LGI1 gene. We propose a novel therapeutic strategy for epilepsy."

A new statistical test that looks at the patterns of high-frequency network activity flow from brain signals can help doctors pinpoint the exact location of seizures occurring in the brain.
Advertisement
Advertisement

An electroencephalogram (EEG) detects electrical activity in the brain using electrodes attached to the ...