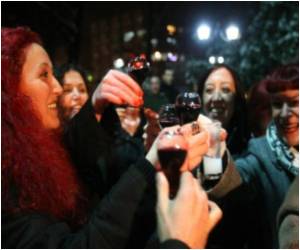 According to a recent research, some people living in disadvantaged neighborhoods may be at increased risk of problem drinking. The study published in the November issue of the Journal of Studies on Alcohol and Drugs found that of nearly 14,000 U.S. adults surveyed, those living in low-income neighborhoods were generally more likely to be non-drinkers than were people in affluent neighborhoods.That was not true, however, of black and Hispanic men.

And among people who did drink, African Americans in disadvantaged neighborhoods were more likely than their better-off counterparts to be heavy drinkers. Also, when black men and white women from poor neighborhoods drank, they were more likely to suffer drinking-related "consequences"ranging from trouble at work, to physical fights, to run-ins with the policethan their better-off counterparts."There are a lot of aspects of your environment that can affect your drinking behavior and what happens when you do choose to drink," says lead researcher Katherine J. Karriker-Jaffe, Ph.D., of the Public Health Institute's Alcohol Research Group in Emeryville, California.

Drug detoxification (or drug detox) is a process that helps drug addicts to give up drugs with less or no withdrawal symptoms.
Advertisement

On one hand, disadvantaged neighborhoods may have a lot of bars or other places to get alcohol, Karriker-Jaffe pointed out. On the other hand, there may be factors in those neighborhoods that limit people's drinkinglike less disposable income to afford alcohol, or cultural norms that frown on drinking.The new findings point to a fairly complex relationship between neighborhood disadvantage and drinking. And it's not clear yet why there are racial and gender differences, according to Karriker-Jaffe.For low-income black men, she speculates, the higher rate of heavy drinking could be related to the multiple stressors in their lives. The higher rate of drinking consequences could have a number of explanations, toolike the bigger police presence in low-income African-American neighborhoods.


Whatever the reasons for the findings, Karriker-Jaffe says they point to opportunities to intervene."This can help us figure out strategies to reach the most at-risk people," she says.It might be wise, for example, to target prevention education or alcohol-abuse treatment programs to certain disadvantaged neighborhoods. But since drinking habits fit into the wider context of people's lives, bigger-picture effortslike improving job opportunitieswill likely be important, too, according to Karriker-Jaffe.It's hard to tell from this study whether cutting down on the typically high number of alcohol outlets in disadvantaged neighborhoods could potentially help.1"We're not sure what the role of increased alcohol availability might be, but it's likely to be important as well," Karriker-Jaffe says.

Alcohol consumption for recreation and relaxation has become a universal culture. But do you think you know enough about this drink - Take this quiz and find out.
Advertisement
<< Genes Causing Neuromuscular Disorders Discovered
Women With Multiple Sclerosis (MS) Should Avoid Infertility... >>

Take this anonymous self-test to evaluate your alcohol consumption and determine if your drinking pattern poses a risk for hazardous health conditions.