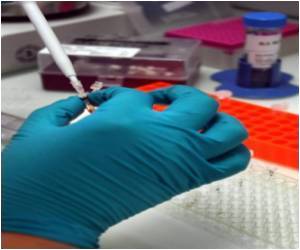 With almost unlimited ability to replicate in vitro, they then differentiated successfully into mature erythrocytes. Although these erythrocytes consisted mostly of fetal-type hemoglobin, they were confirmed to have oxygen-carrying capacity and to have circulatory capacity following transfusion into mice. This technology is expected to contribute to a more reliable transfusion system by offering a new option that allows a stable supply of erythrocytes to be produced without depending on the availability of donor blood. The findings of the research team have been published in the online edition of the Stem Cell Reports.

Erythrocytes, which have the function of transporting oxygen within the body, have no nucleus and are therefore not capable of self-replication. As a result, patients with blood diseases that cause serious anemia are currently dependent on the transfusion of blood products prepared from donated blood. Unfortunately, the number of blood donors is on the decline, mainly due to demographic changes in Japan. Hopes for the creation of a more stable transfusion system have centered on the establishment of a technology for large-scale erythrocyte production in vitro, using iPS cells or ES cells. Up to now, however, there have been no reports of erythrocyte production in sufficient quantities for use in transfusion.

As the c-MYC gene and BCL-XL gene are present within erythrocyte progenitor cells, methods that make use of them actually mimic the body's own system and can therefore be thought of as safer with a view to future clinical application than the previously developed systems for large-scale erythrocyte production using oncogene-derived from human papillomavirus that are not normally expressed in the human body. According to rough calculations, the amount of culture medium needed to produce enough erythrocytes for a normal transfusion pack (containing one trillion units) is 1,000 - 2,000 liters when using direct differentiation from undifferentiated iPS cells, whereas 50-100 liters is sufficient with our newly developed method.

The same results were achieved with cells placed in frozen storage and then thawed. If a more efficient denucleation method can be established along with a method for generating erythrocytes containing only adult-type hemoglobin, progress will have been made toward a more reliable supply of erythrocytes for transfusion in the future.

Gene-therapy Advances may be a Good Option for Those With Blood Disorders
New advancements in genetically engineered cell therapies have shown efficacy and safety in ......

Researchers Use Pulsatile Blood Flow to Unmask New Migraine Features
Recent research has shown that with every heartbeat, the blood is sent to all peripheral tissues ......

Blood Vessels Reorganize Following a Face Transplantation Surgery
Researchers have now found that the blood vessels of the face actually reorganize themselves ......