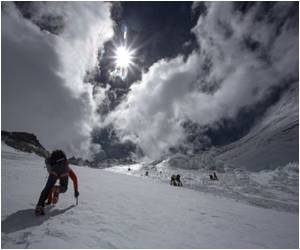 The test could revolutionise trekking and climbing by predicting who will develop the potentially deadly condition so they can avoid high altitudes, ascend more gradually or take preventative medication.

Dr Rosa Maria Bruno, first author of the study, said that it is well known that when ascending to high altitude the quantity of oxygen in the air becomes lower and lower.


Thus people going to high altitude, above 2500m, develop hypoxia, which is a reduced content of O2 in the blood and tissues, and the physiological response to hypoxia is however very different among individuals, ranging from successful adaptation to mild to severe symptoms, called acute mountain sickness or AMS, Bruno said.
Advertisement
She asserted that the symptoms of AMS that are headache, nausea, dizziness, fatigue, loss of appetite, insomnia, irritability, occur in about 30 percent of people exposed to hypobaric hypoxia.

Furthermore, 1-2 percent of people develop potentially life-threatening conditions, such as cerebral and pulmonary oedema, she said.

Bruno explained that the test is very simple and quick, as O2 saturation can be measured very easily by anyone, and a low-cost, portable ultrasound machine is sufficient for the TAPSE measurement, but you need to go and stay 4 hours at high altitude to do the test.

Future steps will be to test whether a shorter length of stay and / or experimental hypoxia, induced in the lab by breathing air with a reduced content of O2 with a mask, are equally informative, she said.

Bruno added that if further experiments confirm the validity of the test in a larger population, the test can be used in the very near future.

Researchers Explain Why We Suffer from Chronic Mountain Sickness
The genetic basis of chronic mountain sickness (CMS) or Monge's disease were decoded by ......