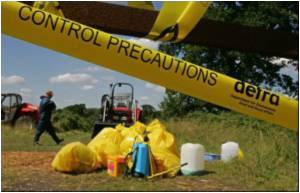 Pigs that are genetically modified to suffer from incurable human diseases have been created by Scottish scientists so they can be used by drug companies to test new therapies for human diseases.

The team of researchers is trying to produce pigs, which are diseased with the lethal lung condition cystic fibrosis and an eye disease that leads to blindness in humans, The Scotsman has learned.

Celiac disease is labeled as a digestive disorder associated with malabsorption as well as an abnormal immune reaction to gluten.
Advertisement

The highly controversial research is being carried out at the Roslin Institute in Edinburgh, famous for creating Dolly the cloned sheep.


If the team is successful, the diseased animals would be used by drug companies to test potential new gene therapies for the conditions.

The technique involves the use of viruses to carry chosen genes into fertilised eggs.

Heart diseases that are present at birth are called " Congenital heart diseases".
Advertisement
Once altered, the eggs are then implanted in surrogate females, so that theoretically animals are born with the genetic conditions.

The resulting pigs are a type of what is known as a transgenic animal - creatures that have inserted DNA that originated in a different species.

Already, to prove genes could be successfully inserted into animals using the technique, pigs have been produced at Roslin that carry a green fluorescent protein gene found naturally in jellyfish.

The animals have a greenish tinge in normal light and when viewed in blue light they glow.

This was done to provide the scientists with a genetic marker - a physical manifestation of how the pigs had been modified.

The cutting-edge research raises major ethical issues about harming animals intentionally for the benefit of humans. It has led to outrage from animal rights organisations.

In an interview, Dr Bruce Whitelaw, head of developmental biology at the Roslin Institute, admitted he had struggled with the idea of creating diseased animals purely to try to benefit humans.

"We are saying we will make these animals sick purely for our benefit," the Scotsman quoted him as saying.

However, he believes his team has a "moral right" to give the technique a try.

His work will be the subject of a debate at Edinburgh Zoo on the ethics of genetically modifying animals.

Whitelaw said the pigs would be used as "models of the human diseases" to provide a better way to test potential treatments.

Existing options involve using mice, which he said were "inadequate".

He believes there are theoretical reasons why pigs should be good models for human disease - because of many physical similarities, such as similar eye size.

However, he acknowledged that creating the diseased animals would "not necessarily" allow treatments to be developed.

But he said that, since the Roslin had managed to develop the techniques to modify the animals in this way, they should find out if it could help to find cures.

"We have this technology. It's really important to try to see if it can help. It may not, in which case we should stop," he said.

"I don't think we should use this technology for something we can currently treat just so we can make the treatment slightly better, but we should use it for diseases that we don't have treatments for," he added.

Whitelaw believes it will take at least two years to produce the genetically modified pigs, and another two years to find out whether they could be treated.