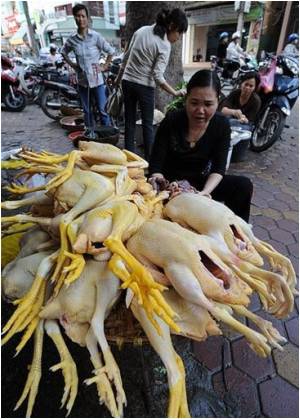 According to a report to be published in the International Journal Data Mining and Bioinformatics, a new computer model could help scientists predict when a particular strain of avian influenza might become infectious from bird to human.

Chuang Ma of the University of Arizona, Tucson, and colleagues at the Huazhong University of Science and Technology, Wuhan and the Wuhan Institute of Virology, explain that since 1997 several strains of avian influenza A virus (AIV), commonly known as "bird flu" have infected people directly from their natural bird hosts leading to numerous deaths. The most recent outbreak is "H7N9" bird flu, which emerged in China in February 2013. The team has now developed a computational technique that allows them to predict whether or not a given strain of bird flu has the potential to infect people. Such a tool would allow the health authorities to monitor specific strains in among wild and domestic birds and so predict with more certainty whether or not that strain is likely to cause a global pandemic of influenza in people.

The method is based on analyzing ninety signature positions in the inner protein sequences of different strains of the virus, the researchers explain. These positions are then correlated with more than 500 different physical and chemical characteristics of the virus. The researchers then use data mining techniques to match up specific physicochemical characteristics with bird to human infectivity. This can then be tracked back to the presence of mutations in the proteins of emerging strains. The team has successfully validated their system, which they refer to simply as "A2H", against known strains of bird flu and those that are infectious to people.


"A2H might be useful in the early warning of interspecies transmission of AIV, which is beneficial to public health," the team says. "It will be further validated and upgraded when more virus strains become available," they add. A similar approach might also one day be extended to other viruses that emerge from non-human hosts and become infectious to people.

Better Protection from Avian Influenza With New Vaccine
A new study by researchers at Oxford University, UK, has suggested that adding a new component to .....