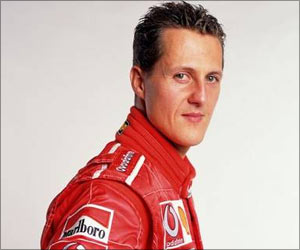 Sabine Kehm, manager of the Formula One legend Michael Schumacher, has reportedly revealed that small signs of progress and slow recovery is seen in the racing ace, as he slowly recovers from serious brain injuries suffered in a ski accident.

Kehm said that there are short moments of consciousness for the Formula One ace and Schumacher is showing small signs of progress.

Kehm said that although she is not a doctor, but medically there is a difference between being awake and being conscious, as being conscious implies that the person is able to interact with his surroundings, News.com.au reported.


Although Kehm did not disclose details of Schumacher's recovery out of respect for his family, she said that she is not at all doubtful in the abilities of the doctors treating him, as they are experts in their field.

Schumacher has been in a medically induced coma by doctors, since he was badly injured in a skiing accident on December 29 last year in the French resort of Meribel and suffered serious injuries to his brain, the report added.