Schools Lure Back Students With a Free Daily Meal in Haiti

A meal of rice, a few vegetables and a little bit of meat is being offered free to lure Haitian children back to school.

By 10:30 am on a Wednesday, the smell of chicken stock wafts through the Rosalie Javoukey school, located in a neighborhood of Haiti's devastated capital Port-au-Prince. 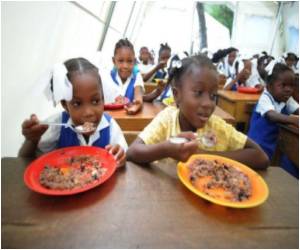 Student recieve a meal at the Rosalie Javoukey school 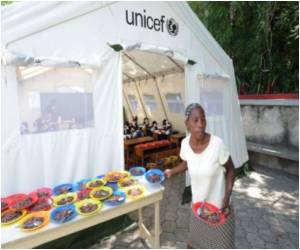 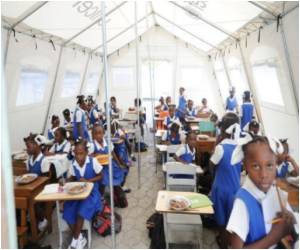 Students get a hot meal at the Rosalie Javoukey school

In the shade of a three-story building scheduled for demolition, women bustle about, doling food onto metal and plastic plates on huge tables set up in between white Unicef tents.


The playground has been eliminated "because it is covered in tents," said Sister Marie-Bernardette, the school's headmistress, and now it serves as a staging area for the daily free school meal.

The children, aged five to 12, wait their turn to retrieve their meal. They return to their desks, say grace and then begin eating, "in silence," their headmistress reminds them.

Schools across Haiti's capital, devastated by a January 12 quake that killed at least 220,000 people, including some 1,350 teachers and 38,000 students, officially reopened on April 6.

But 100 days after the devastating 7.0-magnitude quake, the country continues to struggle and many children are still missing from classrooms in the capital.

Some have left for the countryside, others were killed in the quake, and some are being kept home by their parents.

"It's difficult to convince parents to send their children to school. They are scared that there will be another earthquake and the school will be destroyed," said Alejandro Chicheri, a spokesman for the World Food Programme.

Students at the school also attend classes in fear of what might happen.

"I don't feel at ease at school," said Valencia Demostene, 12. "I know that we will still have natural disasters, like earthquakes..." Her voice trails off.

At the moment, Rosalie Javoukey school has some 400 students, 200 fewer than before the earthquake.

To encourage attendance, the World Food Program has launched a major food distribution program in schools in Haiti, a country where some 500,000 children do not get an education, roughly one quarter of all the country's youth.

"We're trying to get as many children as possible back to school, which will allow them to return to reality and to save their school year. And it also helps parents who are trying to find work so they can bring some money home," said Chicheri.

For the students in this underprivileged neighborhood, the meal is a blessing.

"There are some parents who don't have anything to give their children to eat. You can see it on the faces of the children, they are preoccupied because they are hungry," said Mother Louis, a teacher at the school.

The meals provide the children with some comfort in the short-term at least, but many remain deeply scarred by the experience of the January quake.

Mother Louis asks a class of students how many of them were trapped beneath the rubble of buildings that were strewn across Port-au-Prince by the quake.

About half raise their hands.

"I was under the rubble for two days. My father was the one who pulled me out," said Francesca Jeune, a nine-year-old who dreams of becoming a doctor.

She describes her experience with a giant grin on her face, but teachers say their students remain traumatized and they try to provide the children with therapy.

"We play, we move around. Anything to try to get the earthquake off their minds," Mother Louis says.