Schools in Liberia Shut in Battle Against Ebola 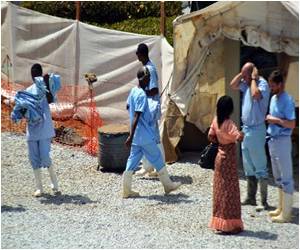 Shutting all schools and placing "non-essential" government workers on 30 days' leave is the step taken by Liberia on Wednesday in a bid to halt the spread of Ebola epidemic raging in west Africa.

The impoverished country, along with neighbouring Guinea and Sierra Leone, is struggling to contain an epidemic that has infected 1,200 people and left 672 dead across the region since the start of the year.

"All schools are ordered closed following further directives from the ministry of education," President Ellen Johnson Sirleaf said in a televised address to the nation.


"All markets at border areas are hereby ordered closed until further notice."

She said Liberia, where the death toll stands at 129 from 249 cases, would be contributing $5.0 million (3.7 million euros) as an "initial contribution" to the regional fight against Ebola.
Advertisement
"All non-essential staff -- to be determined by the heads of ministries and agencies -- are to be placed on 30 days' compulsory leave," Sirleaf added.

"Friday August 1 is declared a non-working day and is to be used for the disinfection of all public facilities."

Fears that the outbreak could spread to other continents have been growing with European and Asian countries on alert and leading medical charity Doctors Without Borders (MSF) warning the epidemic is out of control.

MSF said the crisis would only get worse and warned there was no overarching strategy to handle the world's worst-ever outbreak of the disease.

Liberia's new measures follow Sirleaf's announcement on Monday of the closure of most of the country's land borders as Ebola cases were reported in Freetown and Lagos, Nigeria's largest city.

Monrovia's international airport, a provincial airport and three major crossings were exempted from the closures.

Liberia has seen 129 deaths from Ebola, which causes severe fever and muscle pain, vomiting, diarrhoea and, in the worst cases, organ failure and unstoppable bleeding.

The government has banned public gatherings of any kind, including events and demonstrations, and announced quarantines of Ebola-hit communities.

The Liberian football association said Tuesday it had suspended all activities in the country as a measure to prevent the spread of the virus.

Meanwhile the finance ministry has placed several senior officials under observation for three weeks after a top ministry official died from the virus.

Patrick Sawyer was attending a conference in Nigeria last week when he began to show symptoms of the disease after arriving via the Togolese capital Lome, and died soon after.

The airline that Sawyer flew on, Lome-based pan-African carrier ASKY, suspended all flights to and from the capitals of Liberia and Sierra Leone, which has seen 224 deaths.

Ebola, which first emerged in 1976, is believed to be carried by animals hunted for meat, notably bats.

It spreads among humans via bodily fluids and has killed 56 percent of those it has infected in the current outbreak.

With a historic death rate of 67 percent before the current outbreak and no vaccine, patients believed to have caught the Ebola virus must be isolated to prevent further contagion, according to the WHO.

The UN agency has urged people showing the first signs of the virus to go immediately to health centres.

It has also warned that "safe burial" of bodies is vital in the response to the epidemic, noting that family members have been touching the bodies during funeral rituals and getting infected.

Hong Kong has announced quarantine measures for suspected cases, although one woman arriving from Africa with possible symptoms tested negative, while the EU has said it was ready to deal with the threat.

In Britain, Foreign Secretary Philip Hammond chaired the government's COBRA crisis management committee to assess the situation, although only one person has tested negative for the disease.

Deadly Ebola Virus Kills Chief Doctor at Sierra Leone Ebola Clinic
The deadly Ebola virus is killing more and more people with the doctor in charge of an Ebola ......

As Ebola Fears Spread, Nigerians Plead for Foreign Help
John Ejiofor, a Nigerian, pleaded the world to help contain the spread of the Ebola virus raging ......