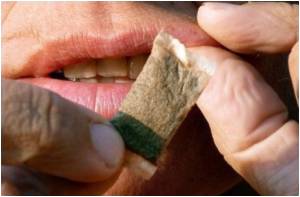 Taking note of government's report that 90 percent of oral cancer cases in the country was caused by chewing tobacco products, the Supreme Court today declined to stay an order banning sale of tobacco products like gutkha and paan masala in plastic sachets beyond March 1.

Hearing an appeal filed by 'gutkha' and pan masala manufacturers challenging a Rajasthan High Court order banning use of plastic sachets, the apex court declined to relax the deadline imposed by it on December 7, while taking on record an expert panel's findings, submitted to it by the Central Government on the harmful impact of various tobacco products on human health.

An Apex Court bench comprising Justices G S Singhvi and A K Ganguly also sought the government's response on various interim and interlocutory applications challenging the government's notification on February 4, implementing the central law, the Plastic Management and Disposal Rules 2009, to regulate the use of plastic for packaging 'gutkha' and other tobacco products.


Earlier on February 4, the government notified the law after the bench rebuked it on February 2 for not implementing the law and asked it to notify the same within two days.

Encyclopedia section of medindia briefs you about the History of Tobacco
Advertisement
With a spate of interim applications against the government's notification before the court, the apex court bench asked Solicitor General Gopal Subramanium: "Why did it take you (the government) so long? What were you doing all these days?"

Solicitor General Subramanium quoting extensively from the research report submitted by an expert panel engaged by the government told the apex court that 86 percent of oral cancer cases in the world originate from India and of this 90 percent are on account of chewing tobacco products.

Earlier on December 7 last year, the Supreme Court ordered a ban on the sale of tobacco products like 'gutkha' and 'pan masala' in plastic pouches from March 2011, while asking the government to carry out a survey on the ill effects of these products within eight weeks.

The Apex Court also asked the manufacturers to explore and decide by March next year on the alternative material for packaging them.

The directions of the Court came while brushing aside the pleas of some of the gutkha manufacturers, who feared that such a direction could lead to closure of thousands of gutkha and pan masala manufacturing units.

The Apex Court bench also asked the government to examine the effects of packaging these products in plastics pouches over human health.

The bench recorded an undertaking from Solicitor General Gopal Subramanium that the government would get the requisite survey done by the National Institute of Public Health on the harmful effects of gutkha, pan masala and other tobacco products and also the adverse effects, if any, of the plastic pouches used for packaging the material.

Every cigarette you smoke is causing irreversible damage to your body; slowly killing you from the inside. It also endangers those around you, your family and children.
Advertisement
<< Mind can Trick You into Feeling Pain or Otherwise
Statins may Help Prevent Diabetic Retinopathy >>

Hearing Loss Calculator Blood Pressure Calculator Find a Doctor Blood - Sugar Chart Post-Nasal Drip Selfie Addiction Calculator The Essence of Yoga Indian Medical Journals Sanatogen Drug Side Effects Calculator
This site uses cookies to deliver our services. By using our site, you acknowledge that you have read and understand our Cookie Policy, Privacy Policy, and our Terms of Use