Save Yourself from Heart Attacks, Heart Diseases by Brushing Your Teeth Regularly 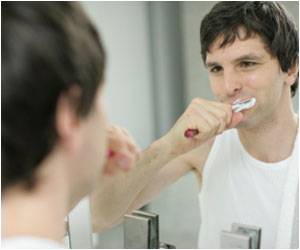 According to a new study, future risk of heart attack can be avoided by brushing your teeth regularly.

Researchers have found that people suffering oral infections also often have cardiovascular problems, and have discovered a particularly strong link between periodontitis and strokes, especially among men and younger people.

According to a recent study, exposure to methyl mercury by ingestion of fish does not increase the risk of coronary heart disease, stroke, or other cardiovascular diseases.
Advertisement

A high dose of the commonly prescribed medication, atorvastatin, which boosts blood levels of anti-inflammatory fats called lipoxins and resolvins prevents both gum and heart disease in humans, and even reverses it.


The researchers described the discovery as "exciting and promising" because lipoxins and resolvins also have the advantage of naturally controlling inflammation without suppressing the immune system.

A healthy diet combined with aerobic exercise can go a long way in preventing high cholesterol and many related heart diseases.
Advertisement
Dr Thomas Van Dyke, of the Forsyth Institute in the United States, said unraveling the role of the oral microbiome and inflammation in cardiovascular disease would likely lead to new preventive and treatment approaches.

Significant epidemiological evidence supports an association between oral infections, particularly periodontitis, and stroke, especially among men and younger individuals. Inflammation plays a major role both in gum and cardiovascular disease.

However, over-the-counter non steroidal anti-inflammatory drugs such as ibuprofen can produce significant cardiovascular side effects, which means it is crucial alternative therapies are found.

Dr Van Dyke recommends people take better care of their teeth to potentially lower their risk of cardiovascular disease and other health problems.

The findings are published in the journal Trends in Endocrinology and Metabolism.

A recent study found no significant effects of daily dietary supplementation with B vitamins or with omega 3 fatty acids on risk of major cardiovascular events.
Advertisement
<< Three States in Australia Will Now Use Medicinal Marijuana i...
Preliminary Tests Not Confirmed but First Suspected Case of ... >>

Is Yo-Yo Dieting Deleterious for Your Heart?

How to Reduce School Bag Weight - Simple Tips Find a Doctor Sanatogen Color Blindness Calculator Blood Pressure Calculator Indian Medical Journals Selfie Addiction Calculator A-Z Drug Brands in India Accident and Trauma Care Diaphragmatic Hernia
This site uses cookies to deliver our services. By using our site, you acknowledge that you have read and understand our Cookie Policy, Privacy Policy, and our Terms of Use