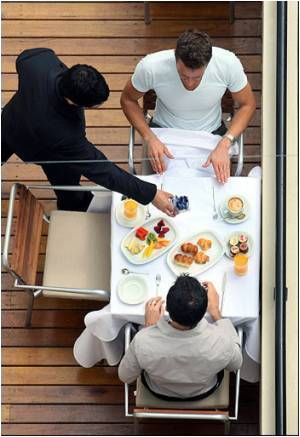 A Saudi restaurant is charging diners who fail to empty their plates and waste food.

The restaurant in Dammam, in the country's Eastern Province, imposed the 'wastage fee' after customers ordered excessive amounts of food and failed to empty their plates.

Chinese restaurant syndrome is an allergic reaction seen in some individuals after eating Chinese food.
Advertisement

According to the restaurant's owners, wasting food is against Islam that associates waste with the devil and goes against social norms that call upon people to think and behave responsibly.


With the new move being initiated by the restaurant, online users took to social sites to give their opinion.

"Restaurant owners do not have the right to hold to account customers on how much they leave on their plate," the Gulf News quoted a user, as writing.

Scientists have identified a painless way to achieve huge energy savings: Stop wasting food.
Advertisement
While some users claimed that the restaurant was seeking publicity with its new tactic, others suggested that the customers take the excess food with them to avoid the fine.

"People should be made aware of the consequences of wasting food. In fact, those who empty their plates should be offered a voucher for a free meal in the restaurant," a user wrote.

A study has determined that wasted food is wasted water because of the large quantum of water that goes into the cultivation and processing of food.
Advertisement
<< Gilead Signs Deals With Indian Companies for Low-Cost Gener...
Over 5% of Indians Struggle With Sleep Problems >>

Menu Labeling Requirements at Chain Restaurants can Lead to Healthy-Eating