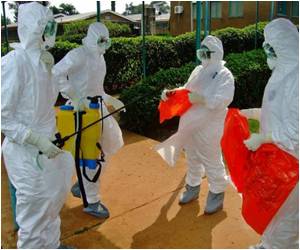 Muslims from the Democratic Republic of Congo and Uganda has been banned by Saudi Arabia from making the pilgrimage to the holy city of Mecca this year after the cholera and Ebola epidemics in the region, a Congolese religious leader said.

"The Muslims living in DR Congo and even those in Uganda won't participate in the pilgrimage to Mecca this year," the head of DR Congo's Islamic community, Cheik Abdallah Mangala, told AFP.

He said he thought the Saudi government had "made the decision to avoid any contamination from the Ebola and cholera viruses," which have taken a heavy toll on the region in recent months.


Pilgrims have already begun to arrive in Saudi Arabia for the pilgrimage, the world's largest annual gathering, which peaks around October 25 this year with more than one million Muslims expected.

There is a need for greater co-operation between governments, corporate sector and citizens to ensure international preparedness and to provide a universal safety net to deal with global health issues
Advertisement
DR Congo has been battling an outbreak of cholera, a contagious intestinal infection, for over a year, and of Ebola, one of the world's most virulent diseases, since mid-August.

According to the World Health Organization, which has not imposed any travel restrictions on the country, more than 20,000 people in DR Congo were infected with cholera in 2012, with a mortality rate of two percent.

Leodegar Bazira, the WHO official in DR Congo, said the organization had recorded 74 Ebola cases since August, 36 of them deadly, putting the mortality rate at 50 percent. But he added that the disease was now under control and confined to the northeastern town of Isiro.

In Uganda, Ebola has killed 17 people since July, but officials announced earlier this month that the disease had been brought under control and urged all countries to lift travel restrictions on Uganda.

To date, there is no treatment nor vaccine for Ebola, a rare hemorrhagic disease that kills between 25 percent and 90 percent of patients, depending on the strain of the virus. It is named after a small river in DR Congo.

Cholera, which is caused by ingestion of contaminated food or water, can strike swiftly, causing intense diarrhea, vomiting and nausea that lead to severe dehydration.

In contrast to the WHO recommendations, some researchers advocate the use of antibiotics in moderate as well as severe cases of cholera.
Advertisement
<< Brain Responsible For Regulating Cocaine-Seeking Behavior
Losing Weight Doesn't Improve Fertility In Women >>