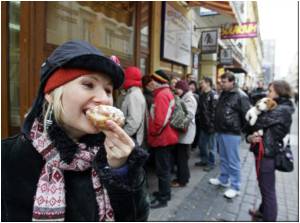 Researchers backed by the US dairy industry say saturated fat is unfairly blamed for causing heart attacks and other cardiovascular problems.

Instead of blaming whole milk and cheeses for clogging arteries, they argue, people should reduce carbohydrates and eat more fish -- alongside a glass of milk. That's the message from the Global Dairy Platform, promoting a series of research articles published in the October issue of Lipids.

"Although diets inordinately high in fat and saturated fat are associated with increased cardiovascular disease risk in some individuals, assuming that saturated fat at any intake level is harmful is an over-simplification and not supported by scientific evidence," said Bruce German, a food science professor at the University of California.


The dairy industry says saturated fat intake has a limited impact on cardiovascular disease risk. For years they have argued that dietary advice wrongly blames saturated fat as the major cause of heart attacks, strokes and high blood pressure.

Heart disease is a major killer worldwide in spite of major strides in the medical field in terms of research, diagnosis, treatment and pharmacology. HIV/AIDS and Alzheimer's disease are vying for popular attention these days and people tend to sideline or neglect healthy heart awareness. Take our quiz and refresh your awareness on heart disease.
Advertisement
Still, the American Heart Association advises that no more than seven percent of daily calories come from saturated fat, which occur naturally in many foods, including fatty beef, pork, cream, butter and other dairy products.

The AHA says, for example, that people who need 2,000 calories per day should get no more than 140 of them from saturated fats, which translates to about 16 grams of saturated fats per day.

Total fat intake should not exceed 35 percent of daily calories, the AHA advises. Remaining fat should come from nuts, fish and vegetable oils, which are sources of monounsaturated and polyunsaturated fats.

Cardiovascular diseases accounted for one of three deaths in the United States in 2006, according to the AHA. Death rates from those diseases fell 29 percent in the 10-year period ending in 2006, it said.

Global Dairy Platform is an international nonprofit organization founded in 2006. One of its goals is "sustaining and expanding global demand for milk and dairy products," according to its website.

To avoid obesity we must consciously control the quantity and the quality of fat that we eat and our daily ...