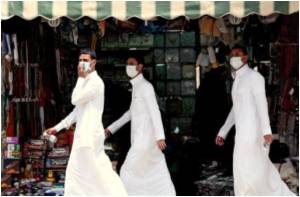 The health ministry announced on its Internet website that a Saudi man who had contracted the coronavirus has died, raising the death toll in the kingdom from the SARS-like virus to 16.

"One of the patients who had contracted the virus has died," in the Eastern Region of Saudi Arabia where most of the kingdom's cases have been registered, the ministry said.

It did not identify the victim, but said he was a diabetic who also had heart and kidney problems.


The ministry also said that the health of a nurse who had been infected by patients in the Eastern Region was now improving.

On Wednesday, the Geneva-based World Health Organisation reported that two Saudi health workers have contracted the deadly coronavirus from patients -- the first evidence of transmission in a hospital setting.
Advertisement
"This is the first time health care workers have been diagnosed with nCoV (novel coronavirus) infection after exposure to patients," the WHO said in a statement.

On Saturday, the health ministry said a new case had been detected, bringing to 31 the number of officially recorded cases in the country.

Since last September, the WHO says it has been informed of a global total of 40 laboratory confirmed cases of the virus, including 20 deaths.

While the virus has been deadliest in Saudi Arabia, cases have also been reported in Jordan, Qatar, Germany, Britain and France.

New Case of SARS-like Virus in Saudi Arabia
In Saudi Arabia, a new case of the deadly coronavirus has been detected where 15 people have ......

WHO Says New SARS-Like Virus can Spread from Person to Person
The new SARS-like virus, known as coronavirus (NCoV), could be passed between humans who are in ......

France Going Through SARS-Like Virus Scare
In France, two confirmed cases of the new SARS-like virus were recorded at the weekend....