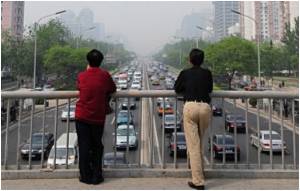 Mayor Fernando Haddad pledged to improve the safety of cyclists after an incident in which a hit-and-run driver dumped the severed arm of a cyclist he had hurt in a local river.

Haddad met with a delegation of cyclists to discuss planned investments to expand the city's 55-kilometer (32-mile) biking trail network and the launch of a traffic education campaign with classes on rules and safety.

The meeting came less than two weeks after a motorist drove off with a cyclist's severed arm attached to his vehicle. The driver later turned himself in and told police had thrown the limb into a river.


The incident caused public outrage, especially among the growing biking community which has long complained about the dangers they face on city streets.
Advertisement
Several bike-riding protests have been held to draw public attention to the issue and to call for more cycleways.

"Cycling improves health, the environment and urban mobility. We are going to establish civilized norms of coexistence," said Haddad, who runs Brazil's most populous city with 11 million people.

He said the first measure would be an awareness campaign targeting motorists, pedestrians, motorcyclists and cyclists via television, radio, the Internet and lectures for bus and truck drivers.

"We must provide a communication plan so that people are better informed, understand better these steps to ensure greater safety for cyclists," he added.

The mayor also vowed to ensure greater participation by cyclists in public transport policies that affect them.

City officials also said there were plans to improve road signs and markings for the benefit of cyclists.

More Youth Suffering Spinal Injuries from Road Accidents, Say Officials
According to doctors and officials, people in the 15-35 age group are suffering from spinal ......

Volvo Unveils Car Airbag That Pops Out to Protect Pedestrians During Accidents
The new pedestrian airbag, which pops up on the outside of the car to protect people who get ......

Study Says Obese Likelier to Die in Car Accidents
People who are obese or overweight face a much higher risk of dying in a car collision compared ......