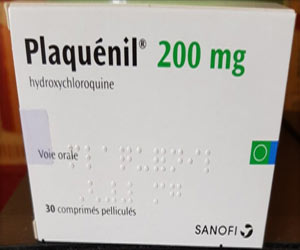 French pharmaceutical company Sanofi is ready to offer the French authorities, millions of doses of Plaquenil containing hydroxychloroquine, to treat up to 300,000 people, in the fight against the coronavirus.

Plaquenil drug was tested on 24 patients, and after few days, the virus had disappeared in many of them in the new clinical trial, carried out by Professor Didier Raoult, director of IHU Mediterranee Infection, a research institute based in Marseille.


‘Corona infected patients treated with the drug Plaquenil had seen a rapid and effective speeding up of their healing process along with a sharp decline in the amount of time they remained contagious.’
Read More..


"Sanofi is committed to making its treatment available to France," a company spokesperson said in a statement to the press.

The institute published various papers in journals in the last two weeks about the effectiveness of Plaquenil, which is used to treat lupus and rheumatoid arthritis.

Health Minister Olivier Veran said that trials must be carried out on a larger number of patients to validate results.

Government spokeswoman Sibeth Ndiaye said that the testing would now be "carried out with a team independent of Professor Raoult."

According to the latest figures from the French Health Ministry, 7,730 cases have been reported across the country and the death toll stands at 175.

Worldwide, out of over 204,000 confirmed cases, the death toll now hit 8,250, while more than 82,500 patients have recovered, according to Worldometer, a statistics website that compiles new case numbers.

New academic study, published by US scientific researchers, also said that chloroquine appeared to be an effective treatment, and appeared to align with the findings in France.

It said: "Use of chloroquine is showing favorable outcomes in humans infected with Coronavirus including faster time to recovery and shorter hospital stay...

"Research shows that chloroquine also has potential as a prophylactic (preventative) measure against coronavirus in the lab, while we wait for a vaccine to be developed."

Till now, no country, nor the World Health Organisation (WHO) has officially published therapuetic measures against COVID-19, but in China and South Korea, guidelines already outline the use of chloroquine as an "effective treatment", the report said.