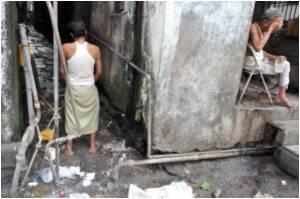 Access to sanitation facilities, such as latrines, reduces by half the risk of becoming infected by parasitic worms that are transmitted via soil (soil-transmitted helminths) according to a study published in this week's PLoS Medicine. These findings are important as infection with parasitic worms can cause diarrhea, weakness, and malnutrition, which in turn can impair physical and mental development in children; they reinforce the importance of increased access to sanitation (a Millennium Development Goal target) to improve health outcomes.

Shigellosis or Bacillary Dysentery is a common cause of gastro-enteritis worldwide and can cause bloody diarrhea (called dysentery).
Advertisement

In an analysis of 36 relevant studies led by Kathrin Ziegelbauer and Benjamin Speich from the Swiss Tropical and Public Health Institute, in Basel, Switzerland, the authors found that compared to people without access to latrines, the chance (odds ratio) of infection with roundworm, whipworm, and hookworm among people who had access to latrines was 0.49. Furthermore, people who actually used a latrine were also half as likely (odds ratio 0.51) to be infected with these parasitic worms.


These findings confirm that sanitation is an effective control measure for parasitic worm infections and therefore, according to the authors, there should be more emphasis on improved access to adequate sanitation in control strategies, in addition to reinforcing the current control measures, such as regularly giving drugs that kill the worms (but do not prevent rapid reinfection) and health education.

Birth defects are abnormalities, which occur before the birth of the baby and can be caused due to genetic, environmental and other unknown reasons.
Advertisement
The authors say: "Our findings, therefore, underscore what the Rockefeller Sanitary Commission stated more than 70 years ago''Cure alone is almost useless in stamping out hookworm disease, because the patient can go out and immediately pick up more hookworms. The cure should be accompanied by a sanitation campaign for the prevention of soil pollution.''"

Importantly, increased access to sanitation would also improve the control of other neglected tropical diseases (such as schistosomiasis and trachoma) and would reduce the incidence of diarrhea and consequently child mortality in low-income countries.

The authors conclude that with the elimination of neglected tropical diseases coming to the forefront of global attention, integrated control approachesusing a combination of regular deworming; information, education, and communication campaigns; and improvements to basic sanitation and access to safe, clean watercannot be overemphasized.

Water and Sanitation Recognized by UN As Basic Human Right