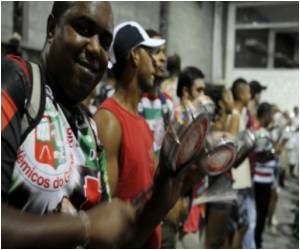 With Rio's Carnival about to start off next month, three of the groups that are putting up grand parades are working day and night to get things reading for the grand Carnival, after a devastating fire wiped out eight months of preparations worth millions of dollars.

As a result of the accidental blaze February 7 in the Samba City complex of workshops and warehouses, the two samba schools worst hit, Grande Rio and Uniao da Ilha, are trying to hastily stitch together new floats and costumes in time for the March 6 and 7 parades.

Up to one million revellers were expected to dance away the gloom in Europe's biggest economy for a few hours Monday as the German carnival season approached its climax here.
Advertisement

"I'm sleeping an average of three hours per day. But, after the shock and the tears, I just had to pick myself up and start over again," one worker for Uniao da Ilha, Teresa, told AFP as she patiently stapled blue cloth to a huge float decked out with glittering black cats.


Nobody is expecting the two schools -- out of a total of 12 taking part in the top tier of the parades that are broadcast around the world -- to fully recover all the work lost.

For the inaugural carnival in Nigeria's sprawling economic capital, a multicoloured tidal wave of dancing people flooded the streets of Lagos on Monday.
Advertisement
In recognition of that, the Carnival organizers have this year said they will not be judging the samba schools by the usual standards.

Rio's parades -- the most sumptuous in a country caught up in Carnival fever -- are at once an exhibition of pride for the city's massive poor population, a much-anticipated climax to days of partying, and a competition watched nationally as closely as any major football game.

In Uniao da Ilha's hangar, another worker, Kawan, was seen sticking on plastic wings to a bee costume.

"We lost 1,800 costumes. We made in just one month what it originally took us eight months to make. The costumes are obviously a bit simpler now, but with good will and hard work, we'll make it," he said.

The stage director for Grande Rio, Cae Rodrigues, still had tears in his eyes as he related how badly his school's preparations and Carnival hopes had been charred.

"Nothing was left. Not a float, not a costume. We had to start from scratch," he said.

"But thanks to all the professionals helping out (from other schools), we have remade everything, although it's less complex because of the lack of time and money," he said.

His school had spent nearly $7 million on its preparations before the fire, most of it corporate sponsorship and government financing.

To help after the blaze, Rio authorities pledged $300,000 for the school to bounce back, but Rodrigues said only a third of that had been received so far.

"We had invested in imported technology, in surprise effects," he said.

Instead, "we had to do over 3,000 costumes and eight floats in just three weeks with more basic materials."

The solidarity of the undamaged samba schools also came to the fore, with some of them donating the chassis for new floats and sewing machines.

"One hundred and fifty craftsmen and workers have been at it day and night. The fire didn't destroy the enthusiasm of the community," Rodrigues said.

Nearby, a worker, Jennifer, echoes that.

"As Carnival gets closer, our ties have deepened. This tragedy has brought us all closer together," she said.

Still, she admitted to "feeling my heart squeezed" when she walks past the nine other schools that escaped unscathed and sees magical floats that surpass what her own school is now forced to make do with.

"But when I return to my hangar, I just get back to work and don't think about it any more," she said.

As Brazil gets ready for its annual carnival, a group has broken out over the issue of toilets for the exclusive use of gays and transvestites in samba schools.
Advertisement
<< A Lottery With a Difference
Study Sheds Light on New Ways of Reducing Reproduction in H... >>

Rio's Carnival Parades Dish Out A Feast for the Senses

Accident and Trauma Care Find a Hospital Calculate Ideal Weight for Infants Diaphragmatic Hernia Drug - Food Interactions Color Blindness Calculator Drug Side Effects Calculator Find a Doctor Iron Intake Calculator Blood Pressure Calculator
This site uses cookies to deliver our services. By using our site, you acknowledge that you have read and understand our Cookie Policy, Privacy Policy, and our Terms of Use