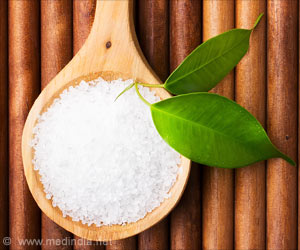 Salt regulation relaxation by UK industry found to be linked with 9,900 additional cases of cardiovascular disease, and 1,500 cases of stomach cancer, according to the researchers from Imperial College London and the University of Liverpool who analysed the salt intake in England population over thirteen years to compare the effect of changes in regulations on how much salt manufacturers can use in their products.

The team, who published their work in the Journal of Epidemiology and Community Health, found that since the regulations on the industry had been relaxed in 2011, the national decline in salt intake has stalled.

Salt is substance existing in water as well as in foods. The article discusses the major risks involved in taking excessive salt intake, along with proposed benefits after reduction.
Advertisement
‘Mandatory salt restricting programme is needed to reduce salt intake. Clear targets, penalties to food industry in case of excess salt usage, public education could reduce the risk of heart attacks, strokes and cancers.’
Read More..


Between 2003-2010, the independent Food Standards Agency (FSA) closely monitored salt content and agreed on targets for salt reduction with industry. For instance, the FSA requested all food manufacturers reduce salt content in 85 categories by 10-20 per cent. This was accompanied by public health campaigns on how to reduce salt consumption, as well as pressure from the Government, who threatened further regulation. This policy has since been emulated in many countries worldwide.
Advertisement
However, in 2011 this policy was replaced by the Public Health Responsibility Deal. Here, the food industry set their own targets as part of voluntary pledges they could sign-up to and they were asked to report their progress to the Department of Health.

But the newer system lacked robust and independent target setting, monitoring, and enforcement, argues Dr Anthony Laverty, lead author of the research from Imperial's School of Public Health: "Evidence from around the world is now showing that mandatory approaches are much more effective than self- regulation by industry in reducing the amount of salt and sugar in our diet."

Salt intake has been linked to an increase in cardiovascular disease - including heart attacks and stroke - as well as to an increased risk of stomach cancers. Adults are advised to eat no more than 6g (one teaspoon) a day, or 3g a day for children. However, adults in England are thought to eat an average of 8g a day and two in three people consume too much salt - with most of this coming from processed foods such as bread, processed meats and ready meals.

The team estimated the amount of cases of cardiovascular disease and stomach cancer associated with the slowing in the reductions in daily salt intake seen under the change of policy in 2011 to 2017. They found that an extra 9,900 cases of cardiovascular disease, and 1,500 cases of stomach cancer could be attributable to the change of policy from the independent FSA-led policy to the Responsibility Deal.

The researchers also found this additional disease burden hit the UK economy, as well as the nation's health. They estimated that relaxing the food industry regulations cost the economy around £160millon from 2011-2017. That included healthcare costs of extra heart attacks, strokes and cancer cases, and the loss of productivity due to workplace absences.

Without urgent and decisive action, the researchers predict even more avoidable heart attacks, strokes and cancer cases. Using a computer model, the team estimated future cases of cardiovascular disease and stomach cancer if the average reduction in salt intake continues at the current rate. They estimated an additional 26,000 of cardiovascular disease, and 3,800 cases of stomach cancer between 2019 and 2025. This could cost an additional £960million to the economy over the next 6 years.

The team used data from the National Diet and Nutrition Survey and national salt surveys, conducted 2000 - 2013. These surveys included urine analysis of over 3,000 people, which showed in detail how much salt they were eating in their diet every day, and acted as a representative sample of the population. The team acknowledge that although the data has limitations, the findings confirm previous criticisms that the Responsibility Deal was not an effective tool to improve the nation's health.

Professor Martin O'Flaherty, co-author of the study from the University of Liverpool added: "We are eating too much salt. Previous research has shown three-quarters of salt in our diet is hidden in processed food such as bread, ready meals and soups. The FSA approach was one of the most robust strategies internationally. Our research shows that we now need an equally robust mandatory programme to accelerate salt intake reduction. This will require clear targets and penalties to ensure the food industry reduce salt content in foods. Softer, voluntary measures could generate additional heart attacks, strokes and cancer cases."