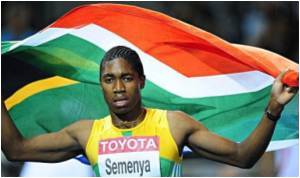 Ending her 11-month exile from competitive racing after the IAAF banned her through a gender test showing her as a hermophrodite, South African star athlete Caster Semenya is set to be cleared to run against women.

The International Association of Athletics Federations and the authorities in South Africa are expected to announce within a few days that the athlete is free to return to the track, ending one of the biggest controversies ever to engulf the sport.


The Commonwealth Games in Delhi in October is also likely to be a key target for Semenya's return, The Telegraph reports..

There were unconfirmed media reports last year that her gender test had revealed both male and female characteristics.

Semenya's hopes were raised last month when South Africa's Sports Minister Makhenkesi Stofile called a news conference in Johannesburg to announce that she had been cleared to run.

Source: ANI
Advertisement
<< The "Super Square Tomato" Is Here: The New Anti-Aging Boon
Both Cyberbullies and Their Victims Have to Deal With Physi... >>

XY Females  Women or Men
All hell broke loose for Semenya, the South African athlete when laboratory tests proved that she .....

IAAF Offers to Pay for Caster Semenya's Gender Surgery
The International Association of Athletics Federations has offered to pay for South African star ......

Gender Row Runner Semenya Placed On Suicide Watch
South African runner Caster Semenya, who is at the center of a gender row, has been placed on ......

Caster Semenya Subjected to Humiliating Tests
South African athlete Caster Semenya, who is at the centre of a gender row, was reportedly ......