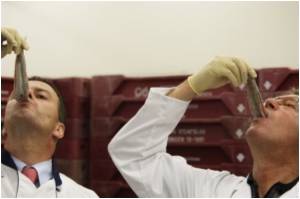 A new study published in the New England Journal of Medicine seems to have debunked the theory that mercury in fish is harmful for the body with a group of American researchers stating that it is perfectly safe to eat such fish.

In fact the researchers say that eating such a fish is instead beneficial to the body since the results of the study showed that those who ate fish with highest levels of mercury showed lesser risk of suffering from cardiovascular diseases.

Mercury in fish has been a potent weapon for environmentalists who have often said that dumping mercury laden wastes into rivers and seas are often harmful to humans since they consume fish that ingest the mercury.


The researchers, led by Dr Dariush Mozaffarian, analyzed mercury levels in the toenail clippings of 3,427 people with heart disease and compared them with a similar number of people without any heart problems.
Advertisement
They found that the mercury levels were almost the same among both the groups (0.23 versus 0.25 micrograms per gram) and were unable to find any link between increased mercury concentration and heart disease.

"This research provides really robust evidence that mercury exposure from fish consumption at levels commonly seen in the US and similar countries are not linked to an increased risk of cardiovascular disease", Dr Mozaffarian said.