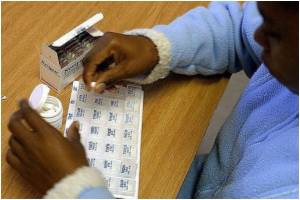 Indian scientists have identified a safe drug against kala azar. Kala azar a disease that puts at risk an estimated 165.4 million people in Bihar, Jharkhand, West Bengal and Uttar Pradesh.

Termed by WHO as a "neglected disease", kala azhar or visceral leishmaniasis, the second-largest parasitic killer in the world after malaria, has proved resistant to most medicines.

Leishmaniasis (Kala-azar) refers to the spectrum of infectious disease produced by species of the Leishmania parasite. The parasites spread by the bite of infected sand flies.
Advertisement


Not only was there no safe drug to treat the infection until now, there were even reports of resistance to courses of treatment in existence. Treatment of the disease was thus becoming more expensive, said Nahid Ali of the Infectious Diseases and Immunology Division at the Indian Institute of Chemical Biology (IICB) here.

Bhojpuri folk songs are be used to spread awareness about the kala azar disease.
Advertisement
The IICB functions under the Council of Scientific and Industrial Research (CSIR).

The only oral drug for this disease, miltefosine, causes toxicity that affects the gastrointestinal and reproductive organs.

"To overcome such shortcomings we tested eleven compounds, all derivatives of a lead containing substance. Out of the entire series, two lead compounds displayed the most pronounced activity," Ali told IANS.

The research, conducted on mice and published in the journal "Antimicrobial Agents and Chemotherapy", shows that the compounds used could trigger a genetically commanded self-destruction process called "apoptosis" or cell suicide.

The lead compounds are safe, in that they did not show any negative effects on the liver or kidney and caused no mutation, Ali added.

Trial Set to Begin for the First Vaccine Against Kala Azar

The trial for the first ever vaccine to prevent kala azar, or visceral leishmaniasis (VL), is all set to begin in the US and India.
Advertisement
News A-Z
A B C D E F G H I J K L M N O P Q R S T U V W X Y Z
What's New on Medindia