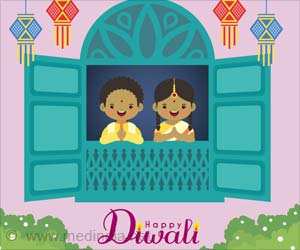 Diwali (Deepawali), the festival of lights is here. People around India like to celebrate a safe and pollution-free Diwali to protect millions of lives from various ill-effects caused by air and noise pollution and also to keep the environment neat and clean.

Ahead of Diwali, Delhi's Directorate of Education has asked the schools to sensitize the students on the ill-effects of burning firecrackers and encourage them to make the festival pollution-free.

The Directorate has issued a circular to encourage the students to keep the environment neat and clean and also pollution free, an official from the Directorate told IANS.


‘Do you want to celebrate a safe and pollution-free Diwali? Then, say no to firecrackers. The Delhi Government has encouraged school children to celebrate cracker-free Diwali to keep the environment clean and save millions of lives from air and noise pollution.’
Read More..


It not only aimed at motivating the students to 'Say No to Fire Crackers' but also to encourage them to celebrate a pollution-free Diwali by lighting candles and earthen lamps.

"The festive season of Diwali is marked by heavy use of firecrackers which release toxic pollutants like sulfur dioxide, carbon monoxide and many others which pollute the air and cause serious ailments like asthma, bronchitis, hypertension, and cardiovascular problems," reads the circular issued by Additional Director (Education) Saroj Sain.

The air and noise pollution caused by the firecrackers also affects the lives of animals, birds and other living beings, it said.