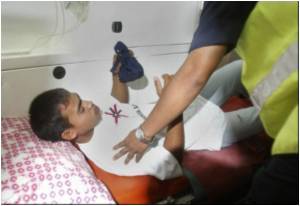 Automobile makers in India may tout the rough terrain capabilities of their sports utility vehicles (SUV). Ford India's Endeavour model has been silently showcasing its performance in a hill village in Tamil Nadu where it has helped 41 pregnant women to deliver their babies safely.

"Some of the villages in the Kalvarayan Hills in Tamil Nadu are in very remote areas without any roads. So reaching an ambulance van is impossible. It was then the option of having an SUV was thought of," K.S.Sudhakar, project director at NGO Health at Hand In Hand told reporters here Thursday.

He said Ford India wanted to do a rural health project under its Sustainable Urban Mobility and Uncompromised Rural Reach (SUMURR) programme and on Tamil Nadu public health department's suggestion, it was decided to have the Ford Endeavour target the villages in the Kalvarayan Hills region, around 255 km from here.


"The other challenge is the age of the pregnant women that ranges from 19 to 40. The people were reluctant to use the public health services due to the distance and continued with the age old practice of having deliveries at home," Sudhakar said.
Advertisement
He said once the project got started, the data of pregnant women in the region was recorded and they were tracked constantly.

This technology was provided by the IIT Madras's Rural Technology and Business Incubator (RTBI), a non-profit organisation focused on technologies for rural India.

"We are looking at the possibility of having a handheld scanning device," Sudhakar said.

The pilot project that began in June 2012 started with an idea of reaching out to 29 villages ultimately ended up touching 54 villages.

In addition to facilitating safe childbirth for the women with high-risk pregnancies, the program led to 27 temporary paediatric and gynecology camps being set up in remote villages.

Such visits enabled about 1,600 women and children to receive much needed healthcare, including screenings for basic illnesses and immunisation coverage.

According to Sundaram of Ford Technology Services, there is a plan to equip the vehicle with the open-source platform OpenXC to create a local cloud housed in the Ford Endeavour.

This would enable nurses in the villages to feed in the data and transmission would happen once the web connectivity is there.

Another new app could help in the timely communication of vital health parameters of the mother and enable hospital readiness while she is en route.

Queried about the future of the project with the completion of the pilot phase, Joginder Singh, president and managing director at Ford India, said: "We are looking at the results and the learnings. We want to scale up the project and looking at Tamil Nadu and Gujarat where we have our plants."

Cars are Less Polluters Compared With Light Trucks, SUVs, Minivans Study
Pollution produced by light trucks, SUVs and minivans though only half a percent higher than that .....

Computer Servers Equally Bad as SUVs for the Climate: Survey
The UK-based environmental organisation, Global Action Plan, has in a report, claimed that computer ...

Suven Seeks Permission for Trials of New Drug
Suven Life Sciences has submitted an application with the Drug Controller General of India for ......