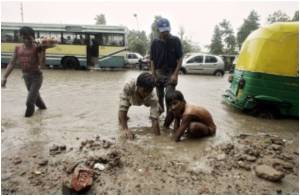 Sachin Pilot, Minister of State for Communications and Information Technology, has said that India is one of the most disaster prone countries in the world.

"India is one of the most disaster prone countries in the world. There are more than a billion people living in this country. So, to mitigate the damages of disaster we have to be well prepared and the key to that lies in information being collected and then given to the people where disaster may or will most certainly strike," Pilot told the media at the National Disaster Management Authority (NDMA) function here.

"So, these guidelines I think are going to play a very crucial role in sensitizing the state governments, the bureaucracy, the lower communities and the ones who are most vulnerable, are the ones who have least resources, who are the least empowered, who live in poor areas. Those are the people; they have to be the focus of our attention," he added.


Pilot further emphasized that these guidelines are important because India has now a tremendous infrastructure of Information Technology.

"So, Information Technology whether it's through satellite or through optical fiber, through mobile phones, through Internet, through broadband. All of that information I think needs to be given out in local languages so that communities and people, who live in far off areas, are able to benefit," said Pilot.

"In relief, rescue operations also a foolproof guideline that can sustain communication network through the disaster, I think, is very important," he added.