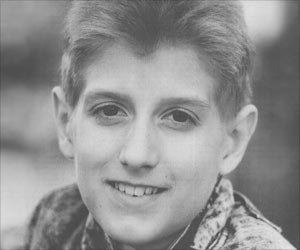 The Ryan White HIV/AIDS Program hauled a total of $2.2 billion over the past year. The funds will be donated to people suffering from HIV/AIDS in the memory of a teenager whose death created shockwaves 25 years ago.

Ryan White was sent out of his school in Indiana after local officials learned of his AIDS infection.

New Paths in Search for AIDS Funds Opened Up By Crisis

The star-studded world AIDS conference will hear urgent appeals for funds at a crucial point in a war now in its fourth decade.
‘The fund will be donated to various cities and towns across the country to support healthcare efforts for people affected by the disease, including access to medication and support services’

He contracted the infection from a contaminated blood transfusion and was not diagnosed until December 1984. Although initially doctors estimated that he had six months to live, he survived six years until 1990.


Ryan was expelled from school that he could be a risk to other students. Now, doctors believe that White could have posed no threat to other children in school.

The famous English singer said that there is a lack of social services and sexual health education, especially in minority, rural and gay communities.

Lack of awareness and ignorance of the disease compelled parents and teachers in Kokomo to keep him from attending school.

The Heath and Human Services Secretary Sylvia M. Burwell announced that the organization would donate $2.2 billion in grants for cities and towns across the country to support healthcare efforts for people affected by the disease, including access to medication and support services.

Elton John expresses his compassion for drug addicts who claim that 'stigma and criminalisation' robbed them of their humanity and exposed them to a life of addiction and disease
<< Indian Government Issues Revised H1N1 Guidelines to States
Present System of Healthcare Plagued by Several Loopholes: M... >>

US War on AIDS Gets Elton John's Endorsement

A new $7 million fund to provide access to HIV services in South Africa has been launched by the Obama administration.