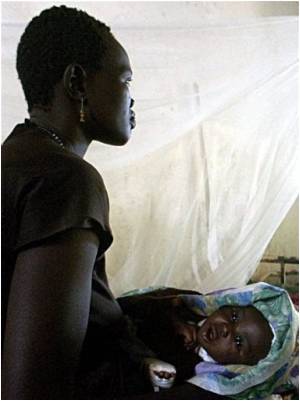 Rwanda is nearing success in its effort to meet the UN-set Millennium Development Goal of reducing child mortality, having made advancement in its fight against malaria and pneumococcal disease.

"Rwanda is one of the few countries in Africa that stands a chance of reaching the MDG targets if the current rhythm is maintained," said Lamine Cisse Sarr, World Health Organisation representative to Rwanda.

"We still have a long way to go but in the last 20 months we have made a lot of progress," Agnes Binagwaho, a medical doctor and permanent secretary in Rwanda's ministry of health said.


MDG number four provides for the reduction of the under-five mortality rate by two-thirds, between 1990 and 2015.

UN Secretary General Ban Ki-moon earlier this month said Rwanda had made "great strides" in working toward the MDGs, "particularly in the area of maternal and children's health."

Nutritional Assessment Calculator helps to find out if you child is undernourished or malnourished.
Advertisement
Now that Rwanda has significantly curtailed malaria, the biggest child killer is pneumonia.

"Out of every five children that die, one dies of pneumonia. Twenty-three percent of all child deaths in Rwanda are caused by pneumonia," Unicef Rwanda representative Joseph Fumbi told journalists.

Few care givers in the developing world are able to recognise the symptoms of pneumonia -- rapid and difficult breathing.

Rwanda has given basic training to lay people at community level enabling them to detect symptoms, administer antibiotics if necessary and transfer complicated cases to hospital.

A quasi-obligatory health insurance typically covers 90 percent of treatment costs, leaving just 10 percent for the family. If the family is too poor to cover even that, hospital doctors often chip in.

Donata Nyirabahizi, who lives in a small mud-walled hut with panoramic views over Lake Muhazi, learned the hard way how quickly pneumonia can prove fatal.

She lost a baby of 18 months three years ago to pneumonia. He died as his parents carried him to the nearest health centre.

"I realised on the Saturday that the baby was sick. When he started having difficulty breathing on the Monday I took him to the health centre."

She described, eyes downcast, how the child had started gasping and then ceased breathing altogether.

"My husband took him off my back and handed him to me. He was dead."

Clementine Mukandori was luckier. The referral system meant that she and her baby son Yves were directed to Kigali's university teaching hospital (CHUK). Yves sits on a bed with an oxygen mask attached with green tape. He will likely be discharged in five to seven days.

And the situation is set to improve further.

In April 2009 Rwanda introduced, with funding from GAVI Alliance, a vaccine against pneumococcal disease -- the leading cause of pneumonia, also responsible for other infections including meningitis and sepsis -- among the jabs obligatory for babies, becoming the first developing country to do so.

GAVI is a public-private partnership that develops and supports innovative ways to increase immunisation in developing countries.

"These days no one is dying from pneumonia," she told journalists.

Rwanda has already made great strides in combatting malaria with the distribution of free bednets treated with insecticide, Florent Rutagarama, a paedatrician at CHUK said.

Whereas prior to the introduction of nets, malaria used to account for one quarter of all hospitalisations, "cases are now very rare. We can go a whole month before getting a positive blood smear in the paedatric wards," he said.

"Now we have good results with pneumoccocal disease, digestive disease is now on top" of our list of priorities, Binagwaho said.

Once Rwanda introduces the Rota virus vaccine to fight diarrhoea, its next priority will be the HPV vaccine to protect women against cervical cancer.

Child deaths around the world could be cut dramatically for just 40 billion dollars a year, as babies often die from easily treatable diseases, a new report by Save the Children said Monday.
Advertisement
Advertisement

Sudden Infant Death Syndrome is death of a baby, under one year of age that occurs in sleep and cannot be ...
This site uses cookies to deliver our services.By using our site, you acknowledge that you have read and understand our Cookie Policy, Privacy Policy, and our Terms of Use  Ok, Got it. Close
×