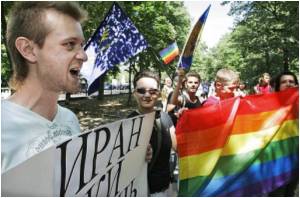 Saying gays could "do their thing" without facing prosecution like during the Soviet era, Russian Foreign Minister Sergei Lavrov defended a controversial bill banning homosexual propaganda.

"We don't discriminate (against homosexuals), but we don't want discrimination to happen in the opposite direction, when one group of people gets the right to aggressively promote their values, which are different from those of the majority and to impose them on children."

"Homosexuality, as you know, used to be a criminal act in the Soviet Union," Lavrov told reporters following talks with his Dutch counterpart Frans Timmermans.


"This article in the criminal code has long been repealed and homosexuals can do their thing absolutely freely and without punishment," he added.
Advertisement
"We don't have any obligation to permit propaganda, which is usually quite aggressive."

In January, the Russian parliament gave initial backing to a bill banning homosexual "propaganda" among minors. Rights activists and Western governments have condemned the measure.

The text of the bill currently does not say what constitutes "homosexual" propaganda, leading to fears that it may be used indiscriminately against gay people holding hands or kissing in public.

The key second reading is expected in May.

In his typically combative style, Lavrov said that Western countries should devote more attention to the rights of Russian speakers in the Baltic countries instead of reacting "so emotionally" to the anti-gay bill.

Some Gays Allowed to Adopt Thanks To Swiss Lawmakers Vote
Gays were allowed to adopt in very limited circumstances by the vote of the lower house of the ......