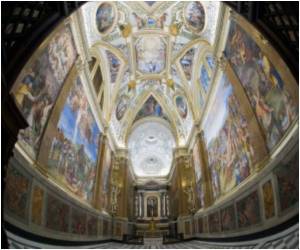 Russian billionaire Viktor Vekselberg opened a museum to display his glittering collection of Faberge eggs in the former imperial capital of Saint Petersburg, once owned by the tsars.

The new Faberge Museum located in the Shuvalov Palace in the city centre put on display nine of the eggs, once given as Easter gifts by the royal family, as well as thousands of jewelled objets d'art from icons to cigar cases.

Vekselberg bought the collection of eggs from the estate of the late Malcolm Forbes, the US publisher of Forbes magazine in 2004, vowing to bring them back to Russia.


"We started this project more than 10 years ago, and we are happy to present the result to you," Vekselberg said at the opening.

The jewelled eggs with enamel and painted details include one given by the last tsar Nicholas II to his mother, Maria Fyodorovna, which is decorated with his portrait as well as that of his heir, Alexei.
Advertisement
Another made to celebrate the first anniversary of Nicholas II's coronation has a surprise inside: a model of a tiny gold carriage. Others contain a gold hen and an enamelled rosebud.

The 18th-century mansion housing the museum originally belonged to Ivan Shuvalov, a favourite of Tsarina Elizabeth Petrovna. It was used for welcoming international delegations in Soviet days.

"The inauguration of this museum is a great event for all of Russia," said Culture Minister Vladimir Medinsky at the opening. "Now we have the chance to see this beautiful and precious collection in Saint Petersburg."

He stressed that the museum was entirely privately funded.

"Not a single kopeck was spent from the Russian budget."

Vekselberg is worth some $15.1 billion, making him Russia's fourth richest businessman, according to Forbes magazine, which estimated the value of his art collection at $850 million.

Court jeweller Peter Carl Faberge made around 50 of the eggs. The family tradition began in 1885 when Tsar Alexander III gave his wife, Maria Fyodorovna, a richly jewelled egg for Easter.

The Bolsheviks sold many of the eggs abroad to raise money after the October Revolution. Others were smuggled out by relatives of the last tsar's family, who were shot in 1918.

Vekselberg's collection of Faberge objects is rated as one of the world's most valuable. When he bought them, the price was not disclosed, but the collection had previously been valued at $90 million.

Each room of the museum was monitored by a security guard at the opening.

The museum will open to the public in December.

World's First Museum for French Fry Lovers Opened
The world's first museum dedicated completely to potato chips has been created by a pair of french ....

New Museum of African Design in Johannesburg
Showcasing the work of the continent's finest contemporary artists, a museum in Africa is now ......

A Museum In Northern Ireland Will Display Titanic Bandmaster's Violin
Officials said that the violin played by the bandmaster of the Titanic as the liner sank beneath ......

Egyptian Museum Vandalized by Mob Attacks
Egypt's tiny Mallawi museum is in ruins as Magdy Tahami looks in disbelief at what remains of it....