Running a Marathon can be Bad for the Heart, Say Experts 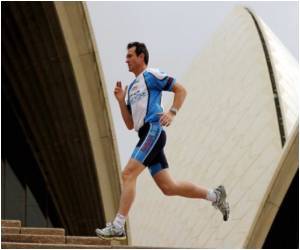 Experts who studied a group of recreational marathon runners have established that strenuous exercise such as running a marathon can damage the heart muscle.

Although they found the effect is temporary and reversible, they warn that these effects are more widespread in less fit distance runners and that recreational distance runners should prepare properly before marathons. Their findings are published in the October issue of the Canadian Journal of Cardiology.

Previous reports have established that a significant percentage of sports competitors show signs of heart muscle injury and cardiac abnormalities after prolonged exercise. In a new study designed to evaluate what kind of stress running a marathon puts on the heart, and whether this might cause permanent damage, investigators evaluated 20 recreational distance runners aged between 18 and 60 who were scheduled to take part in the Quebec City Marathon and who had no known cardiovascular disease or drug treatment. The participants were all amateur runners. Those who had run another marathon less than two months before recruitment or during the study period were excluded.


The runners were extensively observed and tested six to eight weeks before the marathon and on the day itself. They were tested again within 48 hours after completing the marathon, including a second MRI study and final blood sampling. This timeframe guaranteed adequate rehydration (assessed according to hemoglobin level) and a return to baseline hemodynamic state (assessed according to heart rate and blood pressure) after the race, but was short enough to observe any significant myocardial changes before recovery. All runners with decreased left ventricular ejection fraction (LVEF), a measure of cardiac pumping efficiency, after the race compared with baseline underwent a third MRI study after three months of rest to check whether it had reversed.
Advertisement
Investigators noted that the race induced a decrease in left and right ventricular function in half of the amateur distance runners. When a lot of the heart was affected, the heart also showed swelling and reduced blood flow. "We first established that marathon related segmental function decrease - observed in more than half of all segments - is associated with a decrease in resting perfusion and increase in myocardial edema," observes senior author Eric Larose, DVM, MD, FRCPC, FAHA, of the Institut universitaire de cardiologie et de pneumologie de Québec (IUCPQ), Canada. "We also found that heart muscle changes were more common and widespread in runners with lower fitness and less training. Finally, we observed that these changes were transient," he continues.

The investigators do not believe these temporary changes are a cause for concern. "Segmental function decrease is associated with poor prognosis in the presence of CAD or cardiomyopathy. Segmental dysfunction also indicates a poor prognosis in adults without cardiovascular disease. Although we don't know whether such changes mean that recreational runners are at risk, the attendant edema, and reduced perfusion suggest transient injury," says Larose.

"The changes are more widespread among those with lower fitness levels and less training," observes Larose, who is professor of medicine at Université Laval and a cardiologist and clinical researcher at IUCPQ. "Although no permanent injury was observed in this group of runners, the findings suggest that there may be a minimum fitness level needed beyond which the heart can bounce back from the strain of training and running a long race. Furthermore, these results emphasize the need for proper preparation before recreational distance runners engage in a marathon race," he concludes.

Following Marathon Surgery, Conjoined Twins Said to be "Healthy"
A pair of formerly conjoined twins were healthy and happy after they were successfully separated in ...

Chinese Media Announced That Conjoined Twin Girls Were Separated In A Marathon Operation
State media has reported that conjoined twin baby girls have been released from a hospital in China ...

Rapid Response and Imaging of Injuries Helped Marathon Bombing Victims
The devastating effects of terrorism were highlighted to full-effect by the Boston Marathon ......