Run a Marathon to Turn Back the Aging Clock 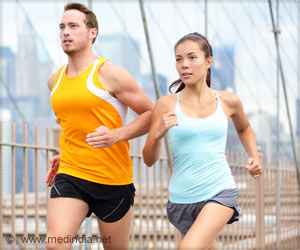 Run a Marathon to Turn Back the Aging Clock

The new year means it's time to set resolutions for 2020 and new research from the Journal of the American College of Cardiology suggests running a marathon for the first time could have several health benefits.


‘Want to turn back the aging clock? Try running a marathon to reduce blood pressure and aortic stiffening. So, make sure to run more to lower your vascular age.’
Read More..

The study found that for first-time marathon runners, training and completion of the marathon was associated with reductions in blood pressure and aortic stiffening in healthy participants that were equivalent to a four-year reduction in vascular age, with the greatest benefits seen in older, slower male marathon runners with higher baseline blood pressure.

"As clinicians are meeting with patients in the new year, making a goal-oriented exercise training recommendation--such as signing up for a marathon or fun-run--may be a good motivator for our patients to keep active," said senior author Charlotte H. Manisty, MD, of the Institute of Cardiovascular Science at University College London and Barts Heart Centre in London.

"Our study highlights the importance of lifestyle modifications to slow the risks associated with aging, especially as it appears to never be too late as evidenced by our older, slower runners."

Regular aerobic exercise is a lifestyle modification that has real-world implications, particularly with the growth in mass participation running as an increasingly popular form of non-prescribed exercise.

The research team used a cohort of 138 healthy, first-time marathon runners from the 2016 and 2017 London Marathon. They examined the participants before training and after marathon completion to determine if age-related aortic stiffening would be reversible with real-world exercise training.

Participants had no significant past medical or cardiac history and were not running for more than two hours per week at baseline. On average, participants were 37 years old and 49% were male. Exclusion criteria included pre-existing heart disease during the preliminary investigations or contraindication on a cardiovascular magnetic resonance imaging scan.

The research team conducted all measurements before training started six months prior to the marathon and repeated them all within three weeks of completing the London Marathon, but no earlier than one week after the marathon to avoid any acute effects of exercise. Assessments included blood pressure measurements and measurements of aortic stiffness by cardiovascular magnetic resonance imaging. Biological aortic age was determined from the relationship between the participant's age and aortic stiffness at three levels of the aorta.

All participants were recommended to follow the "Beginner's Training Plan" provided by the marathon, which consists of approximately three runs per week that increase in difficulty for a 17-week period prior to the marathon. However, the researchers did not discourage participants who wished to use alternative training plans.

The average marathon running time was 5.4 hours for women and 4.5 hours for men. When compared to training data and marathon completion times from 27,000 runners, these times were found to be consistent with a training schedule of six to 13 miles per week.

Training decreased systolic and diastolic blood pressure by 4 and 3 mmHg, respectively. Overall, aortic stiffness reduced with training and was most pronounced in the distal aorta with increases in distensibility--the capacity to swell with pressure--of 9%. This amounted to the equivalent of an almost four-year reduction in 'aortic age.' Older patients had greater changes with exercise training, with males and those running slower marathon times deriving greatest benefit.

"Our study shows it is possible to reverse the consequences of aging on our blood vessels with real-world exercise in just six months. These benefits were observed in overall healthy individuals across a broad age range and their marathon times are suggestive of achievable exercise training in novice participants," Manisty said.

Although the study only recruited healthy participants, those with hypertension and stiffer arteries might be expected to have an even greater cardiovascular response to exercise training.

In an accompanying editorial, Julio A. Chirinos, MD, PhD, from the Division of Cardiovascular Medicine at the Hospital of the University of Pennsylvania, said "Despite some limitations, including its observational nature, the study adds to the body of evidence supporting beneficial effects of exercise on multiple aging phenotypes. Given the profound implications of arterial stiffness for human health, this study is important and should stimulate further research to identify potential molecular mechanisms by which exercise reduces aortic stiffness.

In addition, training for marathons usually involves various concomitant approaches such as better sleep and dietary patterns, and in some instances, over-the-counter supplements, that may confound or interact with exercise training per se. More research to identify optimal integrated training regimens is needed."

Running a Marathon Can Raise Cardiac Strain in Amateur Athletes

Running a full marathon can raise strain on the heart muscle in amateur runners, finds a new study.

Long distance marathon race have negative effects on the body and the reduced supply of blood to kidneys can cause acute kidney injury.

Acute coronary syndrome (ACS) is a sudden, acute life-threatening condition caused by a dramatic reduction in blood flow to the heart.