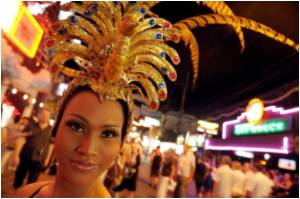 As volunteer medics deals with the fallout from Thailand's southern insurgency, rubber tappers every week are summoned to the scene of beheadings, bombs and shootings.

Violence strikes with grim regularity in the lush, forested hills of Bannang Sata, a militant stronghold -- or "red zone" -- in Yala province, where locals are caught between the warring militants and security forces.

Thailand could be the ideal destination for those who like their coffee with a strong nose, after a blend made from elephant dung was put on sale by an upmarket hotel chain.
Advertisement

"It's hard to collect a body when they have been burnt, beheaded or hit by a bomb blast," said father-of-three Madanee Duereh.


"But it's our duty to help the people... to help them bury their dead the right way," he said, referring to Islamic rites decreeing that the full body must be buried -- a challenge when corpses have been torn apart by bombs.

Nagaland Health Minister Kuzholuzo Nienu says that the Thailand government has donated a condom vending machine to Nagaland government for easy access condoms at controlled prices by people.
Advertisement
Like many Hilal Ahmad Foundation volunteers he makes a living in the rubber plantations that dot the Muslim-majority Thai south, draining and collecting the milky-white sap from the trees.

Drawn from the remote communities they serve, the volunteers provide a safety net of sorts in an area stalked by fear as the eight-year insurgency grinds on.

The Islamic charity, started seven years ago with a handful of volunteers now runs teams across all the restive provinces of Yala, Pattani and Narathiwat. It also has its own "1669" hotline, which villagers dial in the event of an attack.

"They are our first call," said 60-year-old Daliya Doloh, lifting his wrapped-cloth "sarung" to show where a bullet smashed through his knee when unknown gunmen opened fire on a teashop in his hamlet last year.

Volunteers recalled a hellish scene of bullet-riddled bodies and blood-splattered walls when they responded to the attack that killed four -- including a child -- and wounded several others.

Regular ambulance teams from the provincial capital of Yala are reluctant to travel into the remote hills, especially at night or dawn when the militants target security forces with ambushes and roadside bombs.

So villagers and local police turn to the foundation.

"They take care of everything. Without them we are on our own," said Doloh, explaining that the rescue team dressed his bullet wounds and whisked him to the provincial hospital for surgery.

More than 5,300 people -- the vast majority of them civilians according to analysts Deep South Watch -- have died in an eight-year conflict in Thailand's border region, with little sign of it ending.

The near-daily attacks are blamed on a web of militant groups seeking greater autonomy for the southernmost provinces, although the groups have few stated aims.

Attacks by militants -- known locally as "the movement" -- have surged since the summer, with a litany of shootings and increasingly spectacular bomb attacks indicating peace with the Thai state remains a long way off.

Most Muslims in the deep south are fiercely proud of their culture, Malayu language and religion, which distinguishes them from the rest of predominantly Buddhist Thailand.

Motivated by faith and a profound sense of civic duty, the volunteers give 24 hours a week to the charity, praying, sipping sweet tea and swapping banter at their base until their walkie-talkies crackle to life with news of an emergency.

"The job is quite dangerous but we don't mind... we work with our heart. We believe God will protect us," said Abdul Rahman Kalong, a senior member of a 65-strong team.

The volunteers say they are non-partisan, treating casualties from all sides of the conflict, although the minority Buddhist population runs parallel services.

The rescuers operate with the tacit permission of the militants but are still at risk, particularly as insurgents commonly bait security forces into ambushes with a shooting or small bomb, only to detonate a larger device.

The teams say they have been fortunate to avoid serious injuries so far, with volunteers forced to hide in ditches as gunbattles rage around them.

Abdul Rahman said the team, trained in first-aid, would benefit from more skills and equipment as well as 4x4 vehicles to negotiate remote roads when they are deluged by monsoon rains.

"Prophet Mohammed said if you want society to be good you have to start on your own... that's what we are doing. Hopefully working together with the communities will help us towards peace."

It is a seemingly distant aspiration.

Several hours after AFP visited the area a Muslim trader was shot, beheaded and his body torched inside a pickup truck.

Although no group has claimed the attack, militants have carried similar "punishment killings" of supposed collaborators with Thai authorities.

Ten kilometres (six miles) north in Raman district, three volunteers from a separate Hilal Ahmad team chatted with soldiers at the scene of a car bomb that killed five policemen in July.

A metre-wide crater marked the spot where insurgents detonated the 50 kilogram (110 pound) gas canister bomb. Hundreds of metal ball bearings that were wrapped around the device littered the road.

The tense soldiers fanned out at either side of bridge, scanning the scrubland, their M16 rifles half-raised for any potential ambush.

Volunteer Mohamadarafat Jehama took the early morning emergency call and was first on the site after the attack.

He found disfigured corpses strewn across the road and struggled to stem the bleeding from one policeman's wound as he waited 20 minutes for military backup to arrive.

With peace proving illusive -- and the insurgents adopting increasingly sophisticated tactics -- the 25-year-old conceded he was likely to witness further horrors.

But he remained sanguine despite the violence roiling his region.

"This is my home, I don't know anywhere else," he explained.

"I don't know if the killing will stop, so I will do this work for as long as I am needed... I like to help others."

Study Says Half of Thailand's Buddhist Monks are Obese

In Thailand 41 Infected With Bird Flu