Rs.2 Crore Sanctioned In Himachal Pradesh for Treatment of Poor 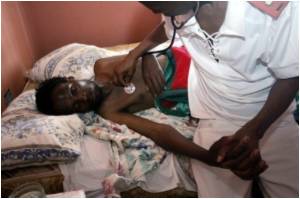 In Himachal Pradesh, poor and needy patients have received a total of around Rs.2 crore from the Chief Minister's Relief Fund for treatment during the past 11 months, an official said.

The state government has requested corporate and industrial houses to contribute generously towards the relief fund.

Since January 2013, more than 190 patients were provided financial assistance totalling Rs.1.85 crore from the Chief Minister's Relief Fund for treatment at the Indira Gandhi Medical College and Hospital in Shimla and other hospitals, a government spokesperson said.


Among those who have praised the government assistance is Bimla Devi of Ganebali village in Banjar area of Kullu district.

She was suffering from a heart disease and had approached the government for financial assistance.
Advertisement
A sum of Rs.1.75 lakh was released from the relief fund for her surgery.

Similar is the story of Som Nath of Harol village in Jwalamukhi area of Kangra district.

He was suffering from Hepatitis-C. The government provided a financial help of Rs.2 lakh for his treatment.

Likewise, Barkat Ali of Bagheri area in Mandi district got Rs.2 lakh from the relief fund for his hip replacement surgery.

There are hundreds of other beneficiaries who received help from the relief fund.

Himachal Pradesh Government Launches New Health Program for School Children
A new health program for children in government schools who suffer from critical illnesses has been ...