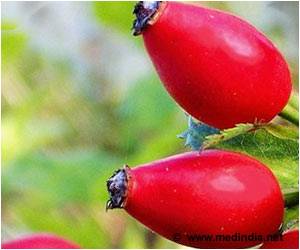 In a study, obese patients who consumed a drink made with rose hip powder every day for just six weeks saw their blood pressure and cholesterol levels drop significantly.

The tiny berries, which sprout at the end of the rose-blooming season, have been used for centuries as a folk remedy for conditions like arthritis.


They are packed with vitamin C and are thought to have powerful anti-inflammatory properties.

Scientists at Lund University in Sweden recruited 31 obese men and women to see if a daily concoction made with rose hip powder would reduce their risks of developing type two diabetes and heart disease.

Heart disease is a major killer worldwide in spite of major strides in the medical field in terms of research, diagnosis, treatment and pharmacology. HIV/AIDS and Alzheimer's disease are vying for popular attention these days and people tend to sideline or neglect healthy heart awareness. Take our quiz and refresh your awareness on heart disease.
Advertisement
Each one spent six weeks drinking the rose hip solution, made with 40 grammes of rose hip powder, followed by six weeks on a drink make from apples and grapes.

At the end of each experiment, researchers measured patients' body weight, blood pressure, blood fat levels and glucose tolerance - a test to see if they are in the early stages of diabetes.

After six weeks on the rose hip drink, patients saw their blood pressure drop an average of 3.4 per cent, a small but significant decline, and their total cholesterol levels drop by almost five per cent.

Scientists estimated that the drop in cholesterol and blood pressure combined would reduce the risk of heart disease in obese patients by 17 per cent.

And they said if further studies confirmed the cardiovascular benefits of the common garden berry, it could even be used as an alternative therapy for patients who are unable to take the anti-cholesterol drugs statins due to side effects.

"The findings may have important health implications. They may represent an attractive alternative to statin treatment for people that, because of muscle pain and increases in liver and muscle enzymes, do not tolerate statins," the Daily Mail quoted the researchers as saying.

"The same is true for people at risk of developing diabetes, as statins recently were shown to increase the risk of diabetes," they added.

The finding has been published in the European Journal of Clinical Nutrition.

Sinopril (2mg) (Lacidipine) Blood - Sugar Chart Find a Hospital Color Blindness Calculator The Essence of Yoga Drug Interaction Checker How to Reduce School Bag Weight - Simple Tips Sanatogen Post-Nasal Drip Iron Intake Calculator
This site uses cookies to deliver our services. By using our site, you acknowledge that you have read and understand our Cookie Policy, Privacy Policy, and our Terms of Use