Rooftop Farms are a Big Hit in Hong Kong 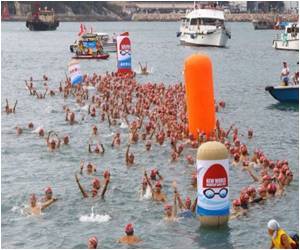 Rooftop farms, above the hustle and bustle of Hong Kong, seem to be a big hit.

Against a backdrop of skyscrapers and jungle-clad hills, earth-filled boxes are spread out on the roof of the 14-storey building, where a wide variety of produce including cucumbers and potatoes are cultivated.

A new, state-funded farming community has given new life to Gaetan Charlly Lengou, but he knows he will have to deliver results in the project, designed to tackle Congo's food crisis.
Advertisement

It is one of several such sites that have sprung up in Hong Kong's concrete jungle, as the appetite for organic produce grows and people seek ways to escape one of the most densely populated places on earth.


"I am happier eating what I grow rather than food I buy from supermarkets," said Melanie Lam, a 28-year-old nurse, who comes to the "City Farm" in the Quarry Bay district of Hong Kong's main island about twice a week.

On 'Satyamev Jayate', Aamir Khan recently spoke about the harmful effects of pesticides and requested the Central and the state governments to adopt organic farming method.
Advertisement
"Compared to vegetables from the supermarket, vegetables that I plant are sweeter and fresher. It gives me a greater sense of satisfaction."

With most of the southern Chinese territory's seven million people living in tower blocks and land prices sky-high, unused roofs are some of the few places in the most heavily populated areas for budding vegetable gardeners.

The money-obsessed city has been late to latch on to rooftop farming, which has been popular in cities such as London and New York for years.

While there are no official figures for the number of sites, as no licence is needed to set one up, anecdotal evidence suggests their popularity is growing.

"I think urban farming is becoming more popular... we have grown bigger in a short time," said Osbert Lam, the founder of "City Farm", which has about 100 regular gardeners two years after opening.

"People who come to the farm are so happy -- It's like a tranquilliser, it's a way out," added Lam.

In To Kwa Wan in the east of the Kowloon peninsula, one of the founders of another rooftop farm says the project has given a boost to the neglected neighbourhood, which has poor transport links and a predominantly elderly population.

Chu Pui-Kwan and two friends came up with the idea of setting up a vegetable garden on the unused rooftop of a 12-storey building.

Using old planks and other materials salvaged from construction sites, they assembled growing boxes, and then decided to get the local community involved before the farm opened in November.

"We invited the older people from around this area to come up, we gave them paints and had them paint the different boxes," she said. "They had so much fun."

Now the brightly decorated boxes are filled with a huge variety of vegetables and herbs, including spinach, peas, lemongrass, mint and rosemary, providing a splash of colour to the drab neighbourhood.

The site has regular open days and runs classes to teach people about urban farming.

Chu is also involved in Time To Grow, a company which aims to improve access to locally produced food.

It is running classes once a week on Victoria Peak, the highest point on Hong Kong's main island, where participants have stunning views over the city.

"The whole idea is to get into each individual home a little bit of green... rooftops, windows, even one pot at a time," said Chu.

Official figures suggest organic food is becoming increasingly popular in Hong Kong, with the number of farms taking part in a government-run scheme to encourage organic agriculture rising to 193 in June this year, from 123 in 2008.

But despite the hobby's growing popularity, there is little sign of Hong Kong's rooftop farmers producing enough crops to sell for profit, unlike their counterparts in cities where space is not so scarce and the idea took root earlier.

Just three percent of vegetables consumed in Hong Kong are grown locally, according to government figures.

Use of Antibiotics for Growth Promotion in Farming Needs Strict Regulation

The controversial, non-therapeutic use of antibiotics in food animals and fish farming has been identified as a cause of antibiotic resistance by researchers
Advertisement
<< Doctors Remove Gall Bladder Instead of Appendix in Woman
Novel Method to Model Diseases Caused by Splicing Defects >>