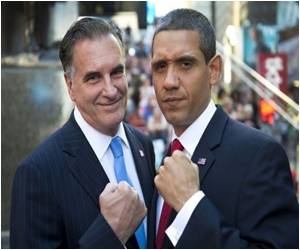 An ad criticizing presumptive GOP vice-presidential nominee Paul Ryan for his record on abortion, birth control and Planned Parenthood has been released by the Obama campaign.

The ad warned viewers saying: "If you think this election won't affect you and your life, think again."


According to CBS News, with recent polls showing Obama's support among women receding from previous highs, the ad's message could 'pack a timely punch'.

"Mitt Romney is for ending funding to Planned Parenthood," warns Longoria, an outspoken Obama supporter who delivered a primetime speech at the Democratic convention in Charlotte.

According to the report, the reminder comes after Romney's comment to the Des Moines Register that abortion legislation is not "part of my agenda".

"Trying to force women to undergo invasive ultrasounds," chimes in Longoria, referring to legislation pushed by GOP-led legislatures in several states that would require women to submit to an ultrasound procedure before terminating a pregnancy.

As for how viewers can stymie the GOP agenda on women's health, the stars' message in the ad is crystal clear: "Vote for Barack Obama," Johansson said. (ANI)

Painful pelvic region is a common complaint in females. What is pelvic pain -its causes and treatment with diagnostic test required to diagnose the underlying pathology.
Advertisement
<< Dark Circles Force Posh to 'Wear Shades' Even at Night
Financial Aid Given by Oz PM to Indian NGO for Community He... >>