Romantic Music Could Help Win Over Girls, At Least In France 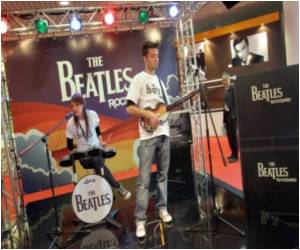 Romantic music could help win over girls, at least in France, a study shows.

Researchers Nicolas Guéguen and Céline Jacob from the Université de Bretagne-Sud along with Lubomir Lamy from Université de Paris-Sud sought to test the power of romantic lyrics on 18-20 year old single females. And it turns out that at least one romantic love song did make a difference.

Music Calms the Soul, and Your Blood Pressure: It Works Magic With the Elderly

The soothing sound of ocean waves along with a calming voice guiding to relax can significantly lower blood pressure in elderly people, finds a new study.
Advertisement

They chose a well-known love song by French songwriter Francis Cabrel, and the neutral song 'L'heure du thé', by Vincent Delerm. A group of young women separate from the main study rated 12 young male volunteers for attractiveness, and the researchers picked the one rated closest to 'average' to help with the experiment.


The researchers then set up a scenario where the 87 females each spent time in a waiting room with background music playing, before moving to a different room where the experimenter instructed her to discuss the difference between two food products with the young man. Once the experimenter returned, she asked them to wait for a few moments alone, and this gave the 'average' male a chance to use his standard chat up line: "My name is Antoine, as you know, I think you are very nice and I was wondering if you would give me your phone number. I'll phone you later and we can have a drink together somewhere next week.'
Advertisement
The love song in the waiting room almost doubled Antoine's chances of getting a woman's number  52% of participants responded to his advances under the influence of Francis Cabrel, whereas only 28% of those who had heard the 'neutral' song by Vincent Delerm offered their details.

"Our results confirm that the effect of exposure to media content is not limited to violence and could have the potential to influence a high spectrum of behaviour," says Guéguen. "The results are interesting for scientists who work on the effect of background music on individuals' behaviour."

The results also add weight to a general learning model proposed by Buckley and Anderson in 2006 to explain the effect of media exposure. Their model states that media exposure in general, and not only aggressive or violent media, affects individuals' internal states, which explains why prosocial media fosters prosocial outcomes.

The duo had been part of a research team that had already shown how romantic music played in a flower shop led to male customers spending more money. This time the researchers used questionnaires to pinpoint agreed-upon neutral and romantic songs.

Why did the music have this effect? It may be that, as shown in earlier research, the music induced positive affect (in psychological terms, affect is the experience of feeling or emotion). Positive affect is associated with being more receptive to courtship requests. Alternatively, the romantic content of the song may have acted as a prime that then led to displays of behaviour associated with that prime. In either case, further research is needed before the researchers will commit to wider generalisations on the targeted use of love songs.

In any case, if you're a hopeful single, awareness of the background music certainly won't do any harm.