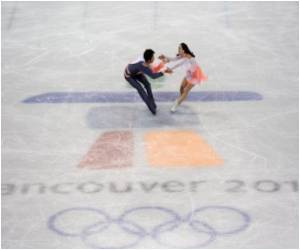 "SF1"-- a tatoo celebrating Scare Force One, a tribe of women on roller skates, can be seen as Adrienne Schreiber curls down her lower lip

When they get together, they push, shove and -- above all -- win.

Bureaucrats, teachers and scientists, the women who compete in roller derby -- an American game that is quickly gaining traction abroad -- come from all walks of life.


But to take part is not merely to don skates and score points.

On a recent Saturday afternoon in a sportsplex in Sterling, Virginia, a suburb of the US capital, the DC All-Stars A team -- drawn from the area?s four teams including Scare Force One -- competed against the Vixens from Canada's Rideau Valley Roller Girls league.
Advertisement
This is a full-contact sport with jostling, bumping and hitting -- so long as it isn't done with the elbows, forearm, hands, head or lower legs.

It is not for the faint of heart or spirit.

As each team of five races around the track, the "jammer" pushes ahead of the pack in an attempt to lap the other team's players. After an initial pass, points are scored with each opposing player the jammer passes.

Team-themed tattoos and frequent injuries are common, as are tough personalities and derby pseudonyms. Condoleezza Slice and Nasty Pelosi -- puns on the names of two of Washington's most powerful women -- play in the area.

- From Mexico to Malaysia -

Roller derby, which got its start in 1930s Chicago, has had peaks and valleys of popularity, and a brief period in the 1970s full of theatrical stunts and storylines similar to those in professional wrestling.

"I think women really stuck with derby because it was an early sport where they were on the same track as men," said James Vannurden, curator of the National Museum of Roller Skating in Lincoln, Nebraska.

The Women's Flat Track Derby Association (WFTDA), the governing body under which many teams operate, had just a couple dozen leagues when it began 10 years ago, all of them in the United States.

Today, there are 243 full-member leagues, according to WFTDA public relations manager Kali Schumitz. The organization also has 101 apprentice leagues that are training to join the competition ranks.

And until just a few years ago, non-American teams were rare.

Sister Disaster, 38, plays on the Rideau Valley team from Ottawa, which beat Washington 180 to 165. Her real name is Lauren Hart.

"We travel a lot, by nature of being in Canada. There are fewer leagues for us to play there, so we have to come to the States," she said.

Schumitz, a journalist who competes in Washington's DC Rollergirls league under the name Lois Slain, says the sport is nevertheless expanding quickly overseas.

"Right now, most of our growth is outside the US. If you look at the makeup of the apprentice leagues, there's a much higher percentage of non-US leagues," she said.

In December, the sport's second-ever World Cup will take place in Dallas, Texas, with 30 countries expected to participate.

Just 13 countries participated in the 2011 event, with the United States dominating and Canada, England, Australia and Finland rounding out the top five.

Leading Team France will be Jessica Poingt, a 26-year-old who lives in Washington and skates for the DC Rollergirls under the name Dual Hitizen.

For Yankee Scandal, a 35-year-old government fish biologist, "It's just really fun to go out there and skate hard and hit people. There's nothing like it."

Scandal, whose real name is Holly Frank, stands patiently with pigtail braids and a human heart tattooed on her right bicep. Inked on its ventricles are the stars and stripes of Washington's city flag, an homage to the DC All-Stars team for which she skates.

"Until my knees give out, I'll keep doing this," she says.

Ragamuffin Rock and Rollers Slipping into Olympic Mainstream
The ragamuffin rock and rollers are the free spirits of snowboarding and freestyle skiing, whose ......

Brain Tumor Patient Runs the Gusher Marathon With Daughter in a Stroller to Emerge First in the Race
Thirty-two-year old Iram Leon, did quite the unthinkable and what a feat! Through 26 mile marathon ....