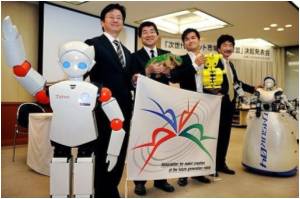 An ape-like emergency response robot that can pick up and manipulate objects at the time of disasters has been developed by NASA.

NASA's Jet Propulsion Laboratory has designed a headless robot named 'RobotSimian', covered with seven cameras that act as "eyes," and has four identical limbs that do double duty as arms and legs and can coast on if the surface would be smooth enough as it has wheels.

The scientist also designed a robot, "Surrogate" using leftover parts from "RoboSimian," which was more traditional upright robot, ran on tracks and wasn't as adept at traversing the complicated terrain that was common in a disaster.


Researchers explained that disaster relief robots could go into environments too dangerous for human rescue workers and execute simple tasks such as lifting debris off survivors or turning off a valve.
Advertisement
Brett Kennedy, supervisor of the Robotic Vehicles and Manipulators Group of JPL said that it was intentionally the tortoise relative to the other hares in the competition, but they felt that a very stable and deliberate approach suites their technical strengths and provides a model for one vital element of the "ecosystem" of robots that they expect to be deployed to disaster scenarios in the future.

Ground Zero - Growing Concerns
The recent calamities in China left the world quaking. One cannot help wondering if these ominous .....