Robotic Surgery for Throat Cancer is Not Superior to Radiation Therapy: Study 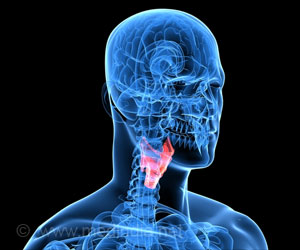 Precision radiation therapy offers a better quality of life for patients being treated for throat or oropharyngeal cancer, compared to transoral robotic surgery (TORS), reveals a new study. The findings of the study are presented at the American Society of Clinical Oncology Annual Meeting.

In 2012, scientists at Lawson Health Research Institute launched the world's first clinical trial comparing robotic surgery to radiation therapy for the treatment of oropharyngeal cancer (cancer at the back of the throat). The team is now reporting findings from the seven-year study which challenges beliefs that surgery leads to better swallowing outcomes, suggesting instead that radiation results in a better quality of life for patients.

Blood Test to Predict the Risk of Throat Cancer Recurrence

A simple blood test that identifies the presence of two antibodies for two proteins, E6 and E7 helps predict risk of throat cancer recurrence.
Advertisement
‘Although each cancer therapy has different potential side effects, new findings suggest that transoral robotic surgery is not superior to modern radiation for treating throat cancer.’
Read More..

For Betty Ostrander, an operating room nurse from Tillsonburg, Ontario, a throat cancer diagnosis was life-changing. Betty was 59 when she discovered a small lump on the right side of her neck. After seeking medical care and testing, she was told she had oropharyngeal cancer.


"I remember thinking 'I'm healthy, I eat right and I exercise; this can't be happening to me.' But it was, and it was scary," recalls Betty. "One of the first questions I asked was whether there were any clinical trials available."

Oral cancers or mouth cancers are a type of head and neck cancer which can occur anywhere in the mouth. April is ear-marked as World Oral Cancer Awareness month to raise awareness of the condition.
Advertisement
Betty was one of 68 research participants in the ORATOR trial. The study included six centers from across Canada and Australia, including the London Health Sciences Centre's (LHSC) London Regional Cancer Program. Participants were randomized to receive either precision radiation therapy, often combined with chemotherapy, or transoral robotic surgery (TORS).

TORS is a surgical method for treating throat cancer which uses a small 3D camera and miniature robotic instruments to remove tumors. LHSC was the first center in Canada to offer TORS in 2011.

"But there was no randomized trial to compare patients' swallowing outcomes. As the first center in Canada to offer TORS, we decided to tackle this problem through the ORATOR trial."

The research team found no difference in survival between the two groups but, surprisingly, participants in the radiation group experienced better swallowing outcomes. A mild decline in swallowing function was observed in 40 percent of the surgery participants compared to 26 percent of radiation participants. All participants were able to eat a full diet after treatment, but 16 percent from the surgery group said they needed to prepare their food specially.

"Our findings challenge the notion that TORS leads to better swallowing outcomes," says Dr. David Palma, Associate Scientist at Lawson and Radiation Oncologist at LHSC. "While radiation was previously associated with poor swallowing outcomes, treatments have advanced considerably and are now much more precise, which may be leading to better patient outcomes."

The team found that patients in the radiation group experienced more short-term constipation and a temporary drop in blood counts. They also experienced an increased risk of tinnitus (ringing in the ears) and high-frequency hearing loss when receiving chemotherapy, with some needing hearing aids. "Each therapy has its different potential side effects, but our findings suggest that TORS is not superior to modern radiation," says Dr. Nichols.

"We hope this research can be used by patients and their oncologists to help inform treatment decisions."

Cases of oropharyngeal cancer have more than doubled since the 1990s. While throat cancer was more common in elderly patients with a history of heavy smoking or drinking, physicians have seen a dramatic rise in cases caused by human papillomavirus (HPV).

There is, fortunately, a high survival rate in patients with HPV-related throat cancer, leading researchers to study the quality of life after treatment.

One Third of Throat Cancer Cases Linked to Human Papillomavirus

A study has suggested that one third of people suffering from throat cancer are infected with a form of the Human Papillomavirus (HPV).
Advertisement
<< High Fiber Intake during Pregnancy Cuts Down Celiac Disease ...
Artificial Intelligence can Detect Rare Diseases Effectively... >>

A specific gene linked to throat cancer has been identified by researchers at King's College London and Hiroshima University, Japan.