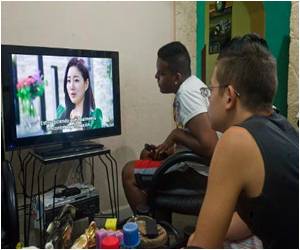 The 50-year-old actor will play the role of Father Jude, who holds the position of Devil's Advocate in the Vatican and he is a charismatic, irreverent, rebellious but also deeply moral man who is passionate about his faith but doesn't feel the need to constantly prove it, Deadline.com reported.

The project, described as an adrenaline-fueled witty epic, follows a diverse group of ordinary people in an extraordinary situation where a collision is imminent with an eight-mile wide comet that's destined to wipe out all life on Earth.


The series will be directed by Emmy-nominated Michael Engler and is written by Iain Hollands who is known for his work in 'Beaver Falls'.

New Anne Frank Play Seeks to Bring Out Identify of Protagonist
A new Anne Frank play promises to bring the troubled teenage girl's identity out from behind the ......

Chinese Movie "Blind Massage" Brings to Limelight the Plight of Blind and Disabled Sections of Society
The award-winning new film, "Blind Massage," by Lou Ye, puts spotlight on those who cannot see for ....