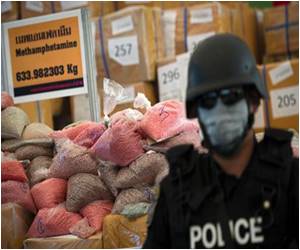 When compared with non-users, methamphetamine users showed less sensitivity to risk and reward in one region of the brain, while a greater sensitivity in the other region.

Deficiencies in decision making are linked to addiction. Chronic methamphetamine use is associated with abnormalities in the neural circuits of the brain involved in risky decision making. Faulty decision making is targeted in addiction therapy so understanding its causes could help in the development of more effective treatments.

Youngsters exposed to the potent illegal drug before birth had increased cognitive problems at age 7.5 years, indicating the need for early intervention to improve academic outcomes, says a study.
Advertisement

The authors used functional magnetic resonance imaging in a study of 25 methamphetamine users and 27 non-users (controls). The patients were examined at rest and when performing the Balloon Analogue Risk Task (BART), which involves the choice to pump up a balloon to increase earnings or cash out to avoid uncertain risk.


Methamphetamine users earned less than the healthy patients on the BART and they showed less sensitivity to risk and reward in the brain region known as the right dorsolateral prefrontal cortex (rDLPFC), greater sensitivity in the ventral striatum and greater mesocorticolimbic resting-state functional connectivity (RSFC). The healthy patients had a greater association between the RSFC of the rDLPFC and sensitivity of the rDLPFC to risk during risky decision making. The authors indicate that may suggest that a deficit in rDLPFC connectivity contributes to dysfunction in methamphetamine users.

The United Nations sounded the alarm over record seizures of methamphetamine across much of Asia as the illegal drug floods clubs and streets.
Advertisement
<< Vitamin E from Canola Oil Linked to Lung Problems
Glimpse into Ape Ancestors' Diets and Environments With The... >>