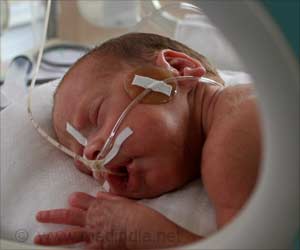 Continuous EEG recordings and its impulse examination over time can help identify better outcomes in infants with Hypoxic-Ischemic Encephalopathy than snapshot evaluations found a new study published in American Journal of Perinatology journal.

Advertisement
‘Cooling (therapeutic hypothermia) is now standard for newborns with hypoxic-ischemic encephalopathy (HIE) to stave off life-long consequences, but deaths and neurodevelopmental disability are still a possibility ’

Amplitude-integrated Electroencephalogram (aEEG) is a bedside tool that involves attaching tiny electrodes to the newborn's scalp to permit clinicians to monitor the complex electrical activity of the child's brain over time.


It's a positive sign when an aEEG shows babies beginning to sleep and normally wake by the time they are three days old. Conversely, severely abnormal aEEG readings in the first days of life predict poor outcomes.
Advertisement
The Children's team used aEEG with infants born with Hypoxic-Ischemic Encephalopathy (HIE), one of the most severe complications that can affect full-term infants.

During pregnancy, birth or shortly after birth, a hypoxic-ischemic event can occur that impedes blood flow and oxygen delivery to the brain, resulting in the destruction of brain tissue.

Cooling (Therapeutic hypothermia) is now standard for newborns with HIE in order to stave off life-long consequences, but deaths and neurodevelopmental disability still can occur.

"We know whole-body cooling or lowering the body's temperature by about 3 degrees Celsius -- can help vulnerable newborns survive and can protect their brains from suffering profound injuries," says An N. Massaro, M.D., a Children's National neonatologist and senior author of the study published online Sept. 28, 2017 in American Journal of Perinatology.

"What we were trying to determine with this study is whether evaluating the pattern of evolution of the aEEG as a whole provides more information compared with looking at snapshots in time."

Eighty infants undergoing therapeutic cooling who met the inclusion criteria were enrolled in the five-year study, one of the largest such studies to date. The babies weighed more than 1,800 grams and were older than 35 weeks' gestational age at birth, and either needed prolonged resuscitation after birth or had low APGAR scores-- a measure of how well newborns fare outside the womb. Continuous recordings of EEG data occurred from the time of admission up to 12 hours after the infants' temperatures were raised to normal and aEEG tracings were calculated.

After the therapeutic cooling blankets were removed, the infants underwent at least one magnetic resonance imaging (MRI) scan prior to discharge. During the routine follow-up check at about 18 months of age, the HIE survivors' cognitive and motor skills were assessed using validated instruments.

Fifty-six of the infants in the study had favorable outcomes. Twenty-four infants had adverse outcomes, i.e., 15 with severe brain injury detected by MRI and nine infants who died. These children had lower APGAR scores and were more likely to have severe HIE and to have experienced more frequent seizures.

Infants whose aEEG abnormalities did not improve were at increased risk and Infants who did not reach a discontinuous background pattern by 15.5 hours of life, achieved cycling by 45.5 hours after birth.

Also, infants who failed to achieve continuous normal voltage by 78 hours after birth were found to be at the most risk for adverse outcomes," Dr. Massaro says.

"In addition to defining worrisome trends, we found that overall assessment of continuous aEEG readings through the course of hypothermia treatment provide the most meaningful predictive power. This means we can speak with families at the bedside with more confidence about their child's outcomes after the infant undergoes cooling therapy".

Cooling Treatment can Reduce Chances of Epilepsy in Kids
Therapeutic cooling treatment in babies deprived of oxygen at birth (birth asphyxia) can help ......

Novel Tool Adapted to Evaluate Brain Health of Oxygen-Deprived Newborns
About 12,000 newborns experience oxygen deprivation (asphyxia) during birth in the U.S. each year, ....

Shortage of Neonatal ICU Led to the Consequent Infant Deaths At Sishu Bhawan, Odisha
The hospital has around only 9 neonatal ICU and 12 Paediatric ICU beds and therefore is struggling ....