Rise in Cancer Deaths in India 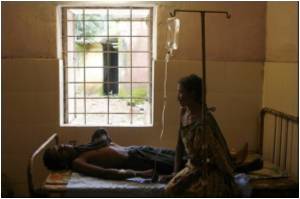 Health Minister Ghulam Nabi Azad has told the Rajya Sabha that India has seen a steady increase in the number of deaths due to cancer.

"There has been an increase in the number of cancer deaths. Information received from Indian Council of Medical Research (ICMR) suggests that estimated number of cancer cases are increasing," Azad said in a statement in the house this week.

The three-year consolidated report of the national cancer registry programme of ICMR for 2006-08 shows an increase in average number of cases in different regions as compared to the previous report of 2004-05, he said.


"While no formal study has been undertaken by the ministry for the reasons of increase in number of cancer cases, this may be attributed to ageing population, unhealthy life styles, use of tobacco and tobacco products," Azad said, replying to a question by MPs H.K. Dua and Gundu Sudharani.
Advertisement
Azad said the government was aware of the study carried out by the Punjab government that at least 33,000 people have died of cancer in the state during the last five years.

The national cancer registry programme of ICMR initiated a project on 'Development of an Atlas of Cancer in Punjab State' in March 2011 to find whether the incidents of cancer are high in Punjab, in particular, and in any specific region or regions of the state, he said.

While health is a state subject, Azad said, the central government has supplemented the efforts of state governments in prevention, early detection and management of cancer cases. It has launched a comprehensive National Programme for Prevention and Control of Cancer, Diabetes, Cardiovascular Diseases and Stroke (NPCDCS) in 2010 in 100 districts across 21 States.

Under the programme, financial assistance up to Rs.1 lakh per patient is provided for chemotherapy drugs to treat 100 cancer patients per district.

The central government also supplements the efforts of the state governments by focusing on early detection of cancer, promoting health education and creating awareness.