Riots, Deaths in South Africa Due to Water Problems 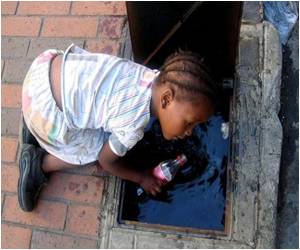 Three babies in South Africa died a tragic death after consuming tap water that was contaminated by sewage.

The poor, as always in the developing world, bear the brunt of water scarcity and irregular access, with parched communities at times erupting in deadly protests.


Town authorities blamed the contamination on a spillage of raw sewage into a dam that supplies water, resulting in more than 100 people having to be treated for diarrhoea.
Advertisement
"Everybody recognises that the our infrastructure is old. As a small municipality we are also facing financial difficulties," town council spokesman Oatile Letebele acknowledged.

"It's a problem that we are grappling with."

An investigation by the City Press newspaper this month revealed that 15 babies had died in a small town in North West province after consuming dirty water. E. coli was again identified as the main source of contamination.

While babies die, communities across the country have in recent months taken to the streets over a lack of water, often with deadly consequences.

The Bloemhof deaths came after rioting in an impoverished township northwest of the capital Pretoria.

Taps in Mothutlung had been dry for days, forcing residents to rely on intermittent supplies from water tankers. People became ill, leading to violent demonstrations during which police shot at protesters.

Five people were killed in the clashes, and the police role is under investigation.

The incidents took place weeks before the country voted in its fifth democratic elections, highlighting the social challenges gripping Africa's most developed economy.

Before the end of the white-minority apartheid regime and the rise to power of the African National Congress in 1994, the access of black people to cities was limited and infrastructure favoured the few.

While the government has admitted "widespread problems" in the water supply chain, it says 90 percent of the population now has access to clean drinking water and promises to address challenges.

The Department of Water Affairs said "rapid urbanisation" made it difficult to achieve targets for service delivery but that it was "in the process of revamping the old infrastructure at a huge cost."

The proportion of South Africa's population of 52 million living in urban areas increased from 52 percent in 1990 to 62 percent in 2011, according to a survey of the country released by the South African Institute of Race Relations (SAIRR) last year.

The institute said the major causes of the trend were the freer movement of people since the end of apartheid and the search for jobs, noting that it posed major problems for the provision of services to the new urbanites.

The most rapid growth took place in South Africa's smaller cities, mostly due to small initial populations and increasing economic activity, it said.

The statistics and the challenges are of little comfort to the mothers who lost their babies in Bloemhof.

"I'm angry," said Keabetswe Wageng, the young mother of the five-month-old who died in June after a severe bout of diarrhoea.

"It's because of the water," she told AFP."She vomited. When I touched her she cried, and after that she was quiet."

The water problems extend beyond the urban areas in parts of the country that receive little rainfall. In some far-flung villages residents share muddy water from wells with livestock.

According to the Council for Scientific and Industrial Research, South Africa has an annual average rainfall of 450 millimetres (18 inches), about half the global average.

The country pins its water hopes on a major project with neighbouring Lesotho launched in 1998.

The Lesotho Highlands Water Project is a multi-phased scheme that delivers water mainly to Gauteng province, the country's economic hub.

More News on:
Bereavement Water - Nutrient that Beats the Heat Tips for Healthy Fasting During Ramadhan Water Matters: Why You Need to Drink Enough Water Everyday