Rickshaw Stunt From Kabul To Istanbul 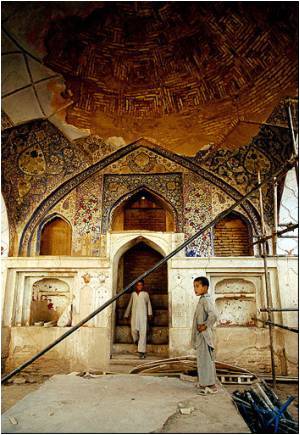 A German woman and her Canadian boyfriend are facing the odds against Taliban by embarking on a most dangerous road trip to bring circus to children in Afghanistan, Iran and Pakistan.

Adnan Khan, 41, and his anthropologist sweetheart have embarked on the punishing 8,000-kilometre (5,000-mile) trip to Istanbul that demands a police escort and hoisting the rickshaw onto trucks to navigate the trickiest stages.

Every second child in India had been a victim of some form of abuse. Worse still, more than 50% of the children had been subjected to sexual abuse of different kinds.
Advertisement

Their purpose is twofold: raise money for a charity that uses circus training to lift the spirits of children in war-torn Afghanistan and to spread those circus skills along the way, to brighten the lives of refugees and orphans.


Adnan left Kabul by road on July 11 as 25-year-old Annika Schmeding flew to Islamabad, after eight months in the Afghan capital, to prepare the way.

Child Maltreatment Continues Despite All Efforts

There has been no overall decrease in child maltreatment despite decades of policy changes. Interventions seem to be failing to fulfil our hopes
Advertisement
Accompanied by Afghan police, Adnan drove to the eastern town of Jalalabad, then onto the border with Pakistan's tribal belt.

Washington considers the tribal belt the global headquarters of Al-Qaeda, and a den of Taliban and other Islamist militants plotting attacks in Afghanistan and against the West. It has not seen Western tourists in years.

Nor does the three-wheel rickshaw, painted yellow, green and white with a jazzy "Rickshaw Circus" on the side, and sporting a brass clown horn, go unnoticed in terrain synonymous with kidnapping, suicide bombings and ambushes.

"I finally got the rickshaw to the Pakistani side. It took hours. It was quite funny. A policeman told me 'I haven't seen a carnet de passage (the document needed for tourists to cross the border) in years,'" Adnan told AFP by telephone on Monday.

His next task was speeding the rickshaw to Pakistan's northwestern city of Peshawar, where Osama bin Laden kept a house during the 1980s war against Soviet troops in Afghanistan, and onto the capital Islamabad.

"The local tribal police force is going to have a guard travel with me," he said, adding that he would be rushing to make Tuesday's first show.

The trip has been months in the planning. Khan and Schmeding expect to spend two months winding their way through Pakistan, Iran and Turkey -- averaging 300 kilometres a day in six hours -- in temperatures that can reach 50 degrees Celsius.

The couple are determined to raise as much money as possible for the Afghan Mobile Mini Circus for Children (MMCC), which was recently forced to close a school in the western city of Herat and sack staff because of a shortage of funds.

"We realized that MMCC is very good at running their programmes, but not really good in terms of publicity. So we wanted people to know that there's been an actual social circus running in Afghanistan for about 10 years," said Khan.

The journalist, who lives in Istanbul but has been coming to Afghanistan regularly for the past 10 years, spoke as girls sang, juggled tennis balls and skittles, and boys danced around the rickshaw and jumped high into the sky.

Since 2002, the charity says it has reached more than two million children in a country where singing, dancing and cultural shows were banned by the Taliban regime, which was brought down in the 2001 US-led invasion.

Besides children, the MMCC also puts on shows for grown ups designed to raise public awareness of basic hygiene, malaria and anti-personnel mines.

"One thing is the educational message in it. Another one is to have the children being entertained," said David Mason, the founder and co-director of MMCC.

"In Afghanistan, entertainment has another mission. It's therapy, collective therapy," he added.

Since 1979, Afghanistan has been largely at war. The 1980s saw the mujahideen fight to evict Soviet troops, then came civil war between 1992 and 1996, until the Taliban took power and the 9/11 attacks prompted the American invasion in 2001.

Since then, a deadly Taliban insurgency has grown with each passing year, killing more than 3,000 civilians in 2011, according to the United Nations, which is a record.

In Pakistan and in Iran, the rickshaw circus will stop every three days in a large town, where they will work with children in orphanages, hospitals and refugee camps.

"It will be nice to raise some money for MMCC as they desperately need it. But the awareness is more important," said Khan.

Find a Doctor The Essence of Yoga Loram (2 mg) (Lorazepam) Selfie Addiction Calculator Post-Nasal Drip Calculate Ideal Weight for Infants Nutam (400mg) (Piracetam) Blood Pressure Calculator Diaphragmatic Hernia Drug Side Effects Calculator
This site uses cookies to deliver our services. By using our site, you acknowledge that you have read and understand our Cookie Policy, Privacy Policy, and our Terms of Use