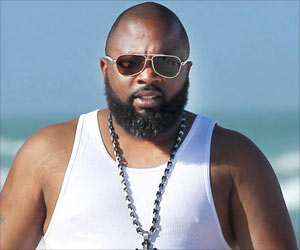 Rick Ross, the famous rapper shed 85 pounds in the past year and chose to do it the healthy way.

A regular healthy eating regimen, crossfit workouts, sound sleep and a drastic cut down of alcohol and soda made him fit and healthy.

His health has improved after the weight loss, which was an outcome of the two seizures he had in 2011. "Two years ago I suffered two seizures," Rick told Good morning America. "I woke up from that. I was like, I really need to re-evaluate what I'm doing."


Rick had to undergo a lifestyle change to get healthier, which included dropping soda from his diet and late-night eating at the recording studio.
Advertisement
Instead of opting for crash dieting, Rick follows a modified low carb diet that includes three eggs with turkey bacon for breakfast. He says that there are no restrictions and still enjoys his favourite foods such as fried Oreos and fried velvet cake, but eats them less frequently and in smaller portions. Rick also cut back on alcohol consumption and has eliminated bread, white rice and fish fillets.

He does his CrossFit workouts (which he calls "RossFit") three to four days a week, Celebrity Health reported. "CrossFit overall is more of an intense workout," said Ross. "So instead of doing 20 minutes on the treadmill, you'll do a 20-minute CrossFit workout and you'll be not only building your endurance, but also muscle simultaneously."

A healthy lifestyle means that a person is fit, energetic and at reduced risk for disease. It reflects on the choices made with regard to eating habits, daily exercise and adequate sleep. These foundations for continuing good health can be adopted and practised by anyone as long as they want to.